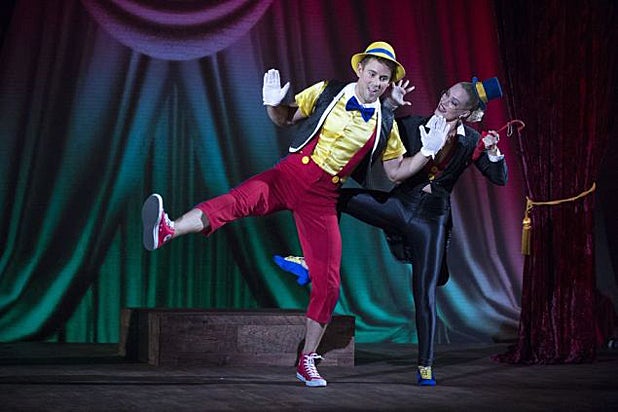 Former “Bachelor” Nick Viall survived dressing up as Pinocchio and performing a very wooden dance on last week’s “Dancing With the Stars” — but would he get past Week Six’s Boy Bands vs. Girl Groups night after being in jeopardy two weeks in a row?

The short answer is yes, shockingly.

In fact, after getting a perfect score on Monday, it was “Glee” star Heather Morris who was voted off.

Amidst boos and shocked reactions from the audience, the actress was “happy” with her experience on the show. “I’m OK. It’s a hard competition, and I am happy that I got to do what I got to do,” she said.

Fifth Harmony member Normani Kordei had an extra advantage at least — not that the frontrunner needed it — as she grinded in front of her backup dancers and pro partner Val Chmerkovskiy dressed in construction gear.

Her dance to “You Just Might Get It” by the Pussycat Dolls “showcased what a great dancer you are,” but was too heavy on hip-hop and too light on Salsa, Len Goodman critiqued.

Pro bull rider Bonner Bolton, who has been hovering at the bottom of the leader board the last few weeks after a strong start, was told by that he needs to find a “way to let go,” while Goodman said he needed to show more emotion.

Olympic medalist Nancy Kerrigan danced to “Free Your Mind” by En Vogue, and was praised by Carrie Ann Inaba for it being “the first time she had tapped into it this way.”

“Wow, wow, wow,” added. Despite this, Kerrigan later found herself in the bottom two.

Viall was told that even though he fits the criteria of being in a boy band, he didn’t have the moves. While it was fun, “it was a Jive with a sunstroke,” Bruno Tonioli told him.

NFL player Rashad Jennings was congratulated for “showing what he’s got” with his dazzling Tango.

Before her surprise elimination, Morris performed her best dance to TLC’s “Waterfalls” with Maks Chmerkovskiy on his first show since his injury earlier in the season.