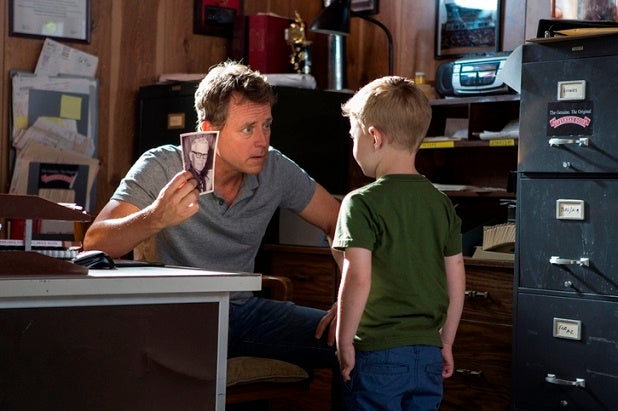 Sony is getting an early start on the Easter holiday weekend with “Heaven Is for Real,” the big-screen story of a small-town pastor whose son claims to have visited Heaven. The film is slated to arrive Wednesday in more than 2,400 theaters nationwide.

The PG-rated family drama is adapted from a 2010 best-selling Christian book written by Todd Burpo and Lynn Vincent. It’s directed by Randall Wallace (“Braveheart”) and stars Greg Kinnear, Kelly Reilly, Thomas Hayden Church and newcomer Connor Corum. Sony bought the book rights in 2011 and teamed with Joe Roth (“Oz the Great and Powerful”), who produced the $12 million drama along with Thomas “T.D.” Jakes, pastor of the 30,000-member Potters House church.

It will be the third movie targeting faith-based moviegoers to hit the multiplexes in time for the holiday, joining Paramount’s Biblical epic “Noah” and Pure Flix Productions’ low-budget drama “God’s Not Dead.”

Sony is hoping “Heaven Is for Real” can bring in roughly $20 million over the five days. It will be the freshest of the faith-based films, with “Noah” going into its fourth weekend and “God’s Not Dead” its fifth. But it’s a crowded field overall with the Johnny Depp sci-fi film “Transcendence,” the horror spoof “A Haunted House 2” and the Disney documentary “Bears” all opening Friday, and “Captain America: The Winter Soldier” and the animated musical “Rio 2” are back.

“Faith-based audiences have been under-served for so long that there’s still plenty of enthusiasm out there, and I think ‘Heaven Is for Real’  will capitalize on that,” Paul Dergarbedian, senior media analyst for Rentrak, told TheWrap. “The presence of Greg Kinnear adds to the mainstream appeal and I can see entire families going to this movie.”

Three days from its release, “Heaven Is for Real” is showing more Twitter and Facebook activity than “Son of God,” Mark Burnett’s big-screen version of his TV miniseries “The Bible.” It opened to $25.6 million in February and has taken in nearly $60 million.

That film benefited greatly from a massive seats-in-the-theaters campaign aimed at faith-based groups and churches, however. While Sony has done some outreach to Christian groups, it’s hoping that “Heaven Is for Real” connects with a broader audience intrigued by questions surrounding the existence of an afterlife.

Sony has had success in this arena before. In 2011 the studio scored with “Courageous,” a similarly faith-based tale that was made for $2 million and became a $34 million sleeper hit.