In recent years, right, wrong or just annoying, the expression “game changer” has been hung on everything from Washington, D.C., political maneuvers to James Cameron’s “Avatar” to whatever new toy Steve Jobs is putting out. Bounding into the lexicon, the expression went from sports jargon to adventurous adjective to cliché faster than Olympian Bode Miller blisters down a mountain.

Funny thing about clichés is that they are often true — and in the case of the videogame "Heavy Rain," that’s a truism game-changing downpour.

Released Tuesday by PlayStation, the dark interactive noir game, produced by Quantic Dream, is already the No. 1-selling videogame on Amazon. In fact, it’s Amazon’s No. 2 overall videogame product, behind the Wii console. “Heavy Rain” also is moving quickly at retailers like GameSpot.

Now, will it sell more than 11.86 million copies worldwide — including 4.7 million sold in the first 24 hours after its debut on November 10, 2009 — as “Call of Duty: Modern Warfare 2” did? Probably not, but what "Heavy Rain” has done already is change the narrative and nature of videogames.

And in the fast-growing sector of the entertainment industry, that’s a leap that could rival bringing sound, color and, as “Avatar” so successfully has done, 3D to the movies.

It starts, as these things often do, in the most mundane of ways: A man goes to the mall with his son. Then things fall off into the abyss when he loses the child. That’s what happened to “Heavy Rain” creator David Cage, 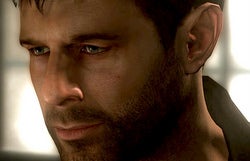 who experienced the beginning of every parent’s worst nightmare a couple of years ago when his son disappeared for a few minutes.

In Cage’s game, the primary character, Ethan Mars (left), loses his son in a mall to the Origami Killer, a stalking serial murderer. Mars loses another son to a car accident and, in the resulting familial fallout, his wife to divorce. The frenzied search for the abducted child and a return to lost normalcy is, with three other playable characters and everyday tasks like rocking an infant to sleep, seamlessly woven in and out of the compelling journey of “Heavy Rain.”

The game is fraught with challenges and choices that have far less to do with the action of a “Call of Duty” or even the open sandbox of a “Grand Theft Auto” and more with unraveling the secrets within the shadows. The Mature-rated game is about making the right decision at the right time and potentially suffering the consequences.

That, in all its terrifying emotional complexity, is the gist of “Heavy Rain.” And, like the best of Francis Ford Coppola, Alfred Hitchcock and David Fincher, this interactive drama cuts deep.

“We wanted to push the envelope in terms of gaming conventions,” Scott Steinberg, PlayStation’s VP of product marketing, told me.

“We feel the unique emotional elements of ‘Heavy Rain’ will take players on a journey they have not experienced before,” he continued, “and we hope this helps foster new approaches to storytelling and unique gameplay styles."

That’s a fostering that could have huge results both creatively, as stronger and more emotive narrative grows in games, and financially, as the market expands.

Here in Hollywood, amidst the frenzy to make everything 3D and get it out there as soon as possible, as well as the ongoing guessing game known as the Academy Awards, it’s easy to overlook just how big a shift the release of “Heavy Rain” is for gaming — just as it is often easily overlooked just how mainstream and lucrative videogame culture is. 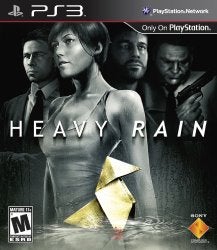 Even with the recent downturn the industry has suffered in this economy, the numbers are startling. Across all demographics, gamers are a widespread and loyal audience.

Recently there have been huge surges, due in no small part to Nintendo’s interactive Wii system, in use by seniors, or “Matures,” as marketers have taken to calling them.

That’s right, it’s not pimply-faced smelly boys playing videogames — it’s them, their sisters, their parents and their grandparents.

If those numbers don’t impress you, the bottom line will.

Retailing for $59.99 for the standard edition and costing about $200 million to make and globally market, “Call of Duty: Modern Warfare 2” racked up $500,000,000 in sales in five days. That’s about half the time it took “Avatar” to make the same amount at the box office.

With the rise of even more platforms and social gaming over the likes of Facebook, videogames have not only greater technology but also the tentacles to reach where other elements of the entertainment industry cannot.

In that context, the real big news last year wasn’t the hit the industry took or the success of “Modern Warfare 2” but the $400 million that Electronic Arts, one of the biggest players in the videogame industry, paid for Playfish, one of the leading social gaming companies. Why? Because, with Playfish’s games having 60 million-plus monthly players, it’s a real investment in real growth.

“Heavy Rain” isn’t the first videogame to delve into the pathology of fear and the neurotic obsession of loss. Quantic Dream’s 2004 game “Fahrenheit” stalked similar territory. But, just like how 2005’s “Chicken Little” and 2008’s “Journey to the Center of the Earth” went 3D before “Avatar” came out, “Heavy Rain” is the first film to transform what was a novelty into the narrative norm.

Developed from a 1,200-page script, 10 times more than most Hollywood movies, “Heavy Rain” is heavily plotted out. Players move from scenario to scenario with jump-cut speed, leaving one mini-chapter in minutes for another, never looking back, always reeling forward – a lot like life.

That, in a lineage evolved from “Pong” to “Super Mario” to the "Grand Theft Auto" series, is what makes “Heavy Rain” unique — it’s so real, in the gray areas as much as the black-and-white.

This is not a game anymore; this is life in a game, a fully developed world.

That’s why I think one day we’ll look back and see that “Heavy Rain,” like “The Jazz Singer,” “Sgt. Pepper’s Lonely Hearts Club Band” and “Avatar,” was just the first few drops of a hard, hard rain that washed everything before it away.