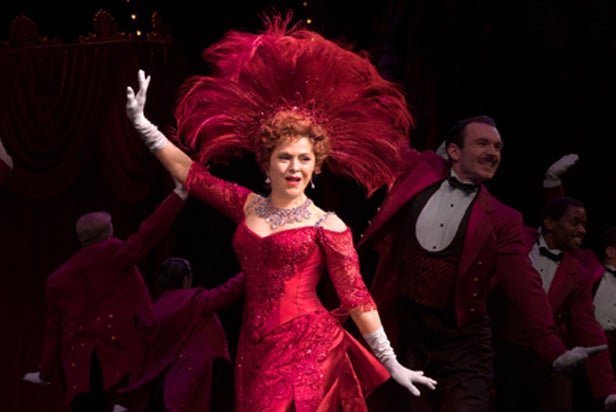 Don’t pity Bernadette Peters for taking over for the force of nature known as Bette Midler in the title role of the Tony-winning hit musical revival “Hello, Dolly!” The Broadway veteran is, as the Act 2 song goes, back where she belongs and bringing a distinctly Broadway energy to this warhorse of a show.

Make no mistake: Peters brings a different kind of star power and charisma to the aging matchmaker at the heart of composer Jerry Herman’s 54-year-old show. At 69, she still has that familiarly nasal, vibrato-heavy voice. And while she can’t match some of Midler’s comic brio — particularly in an Act 2 bit with food that feels more like a forced-feeding — she moves much better on stage, even tossing in some tap elements to an Act 1 production number.

She also brings a refreshing vulnerability to Dolly Levi — a word that you could never put in the same sentence with Bette Midler. In Peters’ hands, the Act 1 show-stopper “Before the Parade Passes By” begins as a heart-tugging almost introspective cri de coeur until she builds up the courage to take on the world.

Before long, she also takes on center stage in an increasingly elaborate production number that Jerry Zaks stages with a full cast of Warren Carlyle’s Gower Champion-inspired choreography and the benefit of Santo Loquasto’s remarkable sets and costumes.

Peters is well-matched with Victor Garber as the Yonkers “half-millionaire” Horace Vandergelder who is Dolly’s client-turned-target. Garber brings a curmudgeonly energy to a role that David Hyde Pierce originated in this revival last spring, and it works well for him.

Other new additions to the cast are a bit of a mixed bag: Molly Griggs is fine, but pales in comparison to her predecessor, “Lady Bird” supporting player Beanie Feldstein, as the millinery shopgirl Minnie Faye. But the real standout in this production is Charlie Stemp, a young Brit who had a breakout last year in a London revival of the obscure musical “Half a Sixpence” and here plays the teenage shop clerk Barnaby Tucker.

It’s worth noting that the previous Barnaby, Taylor Trensch (the new star of “Dear Evan Hanson”), was fantastic. But Stemp virtually steals the show with his guileless aw-shucks charm and high-jumping dance moves — many of which have been added to the production since he joined the cast.

Stemp somehow manages to upstage Gavin Creel, a Tony winner last year as the thirtysomething head clerk who sneaks out for a night on the town hoping for his first kiss — and winds up falling for the lovely widow and milliner Irene Molloy.

Kate Baldwin, as Irene, has somehow grown even more enchanting in her time with the production, commanding numbers like “Ribbons Down My Back” and “It Only Takes a Moment” with her crystalline soprano. And Jennifer Simard continues to make a perfect comic foil as the coochie girl Ernestina who is Horace’s penultimate match.

“Hello, Dolly!” is the sort of show that seemed old-fashioned even when it was new. But Peters & Co. are providing a good lesson in the fine art of roasting — and serving up — a chestnut.