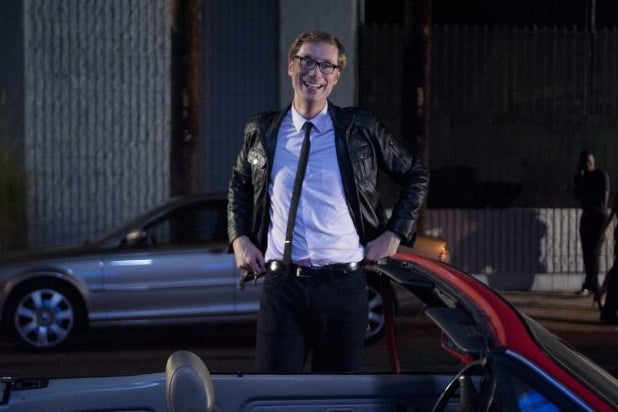 As a 6’7” rail-thin comedy writer, pretty much anything Stephen Merchant does is going to be awkward. In his HBO show, “Hello Ladies,” Merchant capitalizes on that God-given talent — and body.

If you don’t know Stephen Merchant by name, then you know him by IMDb page. He’s the other guy behind all of the projects that made Ricky Gervais rich and famous (“The Office,” “Extras,” “The Ricky Gervais Show,” et al.)

There was one good reason that Merchant did not work with Gervais on the current HBO project — Ricky doesn’t know what dating is like: “I suppose I could have collaborated with Ricky,” Merchant said. “But he’s been in a relationship with the same girl since he was 20.”

That’s normally a good thing, but it’s problematic in the comedy. Merchant plays Stuart Pritchard, a nerdy, less-than-suave Englishman who comes to Los Angeles to reverse his lousy luck in love. It’s not exactly an acting stretch for the self-deprecating, self-described “lonely, single” comic whose stand-up special of the same name chronicled his lack of game.

“Much of my dating life has been around fearing embarrassment,” he told TheWrap. Merchant was so convincing as an ineligible bachelor in his “Hello Ladies” stand-up show that HBO actually approached him to turn it into a TV series here in the States.

His strategy was simple, somewhat pathetic, but honest and brilliant: “I wanted the audience to feel superior to me,” Merchant said of the stand-up special in a Wrap interview. “My heroes: Bob Hope, Woody Allen … were always the butt of the joke.”

As is Merchant in “Hello Ladies.”

In the spin-off, Stuart is such a self-absorbed failure that at times the show can be tough to watch, which Merchant didn’t originally consider. “It never occurs to me that people will see it as anything other than comic, really,” he told TheWrap.

But now that the show has been on the air for a few weeks, Merchant said he understands viewer investment in the characters, and only half-joked that he may have to tone down his dating shortcomings in a second season — if HBO will have him back, that is. Still no word on that, Merchant says.

The style of comedy suits Merchant very well. He allows viewers to laugh at him instead of with him. Stuart’s a jerk, technically, but you can’t help but root for him.

“The idea that I never understood in comedy is trying to be sexy and cool,” Merchant told TheWrap, citing Eddie Murphy‘s stand-up specials in the 80s, where the then-rockstar comic wore leather jumpsuits. As a lad, Merchant could never figure out if they were meant to be cool, or part of the joke.

That wouldn’t have worked in his native country. When asked, Merchant thoughtfully sums up the difference between British sitcoms and American sitcoms quite well: “[In British comedy] You can sort of start in a sadder place, and what you’re rooting for is the characters to meet moments of happiness, of upswings,” he said.

In America, it’s the exact opposite: The characters start out OK, then they meet moments that make them “wobble,” but then they end up OK again, Merchant says.

But the other big difference between the TV industry on each side of the Atlantic Ocean is the business itself.

“Syndication doesn’t exist in England,” Merchant said. “There’s no financial incentive to keep something going that long. You’re never going to make millions and millions of dollars for your backers. Theres so much vested interest in America.”

This Sunday, Stuart gets mixed up with the wrong crowd as tries to blend in with a Long Beach crew. Meanwhile his friend  — and tenant — Jessica (Christine Woods) unsuccessfully attempts to define her relationship with friend-with-benefits Glenn (Sean Wing). It does not go quite as she hoped, as viewers will see below.

Watch the exclusive clip from this coming Sunday’s “Hello Ladies”: