Through no fault of Sally Field, her new movie “Hello, My Name Is Doris” kept making me think about Carol Kane. Field plays a hoarder, but unlike Kane’s character in the recent indie “Clutter,” Doris is the cute kind, one whose house remains spotless despite stacks of junk in every room. Her easy-to-clear mess turns out to be mostly metaphorical, without the sad reality of rotting food or genuine mental illness.

And since Doris goes mostly unnoticed by her young, obnoxious Manhattan co-workers, I hoped she would snap like Kane in Cindy Sherman’s “Office Killer” and take us to a far less condescending and patronizing storyline than we get in “Hello, My Name Is Doris.”

In her first big-screen leading role in nine years, Field uses her considerable powers as an actress to imbue some humanity into Doris, but the film kneecaps her efforts at every turn. Director Michael Showalter (alum of “The State” and co-writer with Laura Terruso, on whose short film this is based) can’t seem to decide from scene to scene whether Doris is to be loved or pitied or mocked, resulting in a movie that undercuts all of Field’s hard work.

Doris lives on Staten Island, where she’s taken care of her mother for years while also commuting into the city to work as an accountant at a hip clothing label. (A co-worker played by Rich Sommer of “Mad Men” notes that Doris is one of the few holdovers from the days when the company “sold chinos.”) The movie opens with her mother’s death, and on her first day back at the office, Doris finds herself hopelessly smitten with the company’s new art director, John (Max Greenfield, “The New Girl”).

John is cordial to Doris — which is more than can be said for the rest of her office mates — and with the help of the granddaughter of her pal Roz (Tyne Daly), Doris indulges in a little Facebook stalking. Soon she’s learning to love John’s favorite band, which leads to them bumping into each other at a show in Williamsburg. (The granddaughter suggests to Doris that an EDM show means wearing bright colors; Doris’ ensemble winds up being ridiculously garish, but so much so that the band wants to put her on their next album cover.) 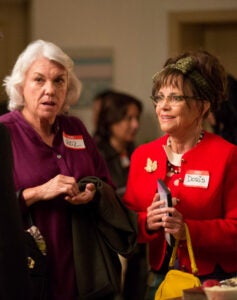 Doris is constantly presented as a cat lady without the cats — she’s the kind of person who wears two different pairs of glasses to read the fine print rather than get bifocals — and while her pursuit of John is clearly doomed from the start, her late-in-life romance could have been the basis of an interesting story. Instead, we get ridiculous fantasy sequences (I haven’t seen the short, but I bet five bucks that’s where they come from) and ideas that feel as worn-out and useless as the single ski Doris keeps in her overstuffed living room.

Among the worst déjà vu offenders: Doris’ deep squareness makes her catnip for Brooklyn’s hippest hipsters; Peter Gallagher turns up as a smarmy self-help guru whose motto “I’m possible” resonates with Doris; her inconsiderate brother (Stephen Root) and his downright vicious wife (Wendi McClendon-Covey, misused) constantly nag her to throw out all the stuff Doris and her mother collected over the years so that they can sell the house.

Showalter doesn’t have a firm enough grasp of the reins for the kind of character-based comedy he’s trying to make here. Sometimes we’re clearly meant to laugh at Doris’ clumsy efforts at flirtation and socialization, and at others, the director wants us to relate, or maybe even cry, but he can’t have everything, which ultimately leaves us with nothing.

Veterans Field and Daly find a way to create empathy and believability amidst the tonal shifts, but no one else fares as well. Greenfield smiles as hard as he can, but he’s not playing a character as much as a blank slate onto which Doris can project her frustrations and her repression. And while Kyle Mooney has a few funny lines as an on-trend photographer, it’s exactly the same stuff we’ve seen him do on “Saturday Night Live” and in “Zoolander 2”; he’s a talented comic and writer, but he needs to start mixing it up before he becomes irretrievably pigeonholed.

Like a musical that makes you hum the tunes of other shows, “Hello, My Name Is Doris” had me considering different, better movies, even ones that don’t feature Carol Kane. By the end, I was appreciating “Grandma” all over again; that’s a movie that treats a complicated protagonist of a certain age with dramatic respect. It knows what it wants to say and how to say it, which more than “Doris” can manage.