“Firefly Lane” Season 2 has arrived, and with it comes another loaded lineup of signature songs for the seventies, eighties, nineties and early 2000s. Throughout the shifts between three separate timelines in Tully and Kate’s friendship, needle drops help distinguish which part of their lives we’re watching, especially when it gets confusing between the older versions of Kate Mularkey Ryan (Sarah Chalke) and Tully Hart (Katherine Heigl). Kristin Hannah’s 400+ page novel off of which the television show is based uses certain songs and lyrics to introduce the new decades, or parts of the book, like ABBA’s “Dancing Queen,” Pat Benatar’s “Love Is a Battlefield” and more.

Season 2 boasts two Whitney Houston songs — “I’m Every Woman” and “How Will I Know” — Cyndi Lauper’s “True Colors,” The Knack’s “My Sharona,” Chaka Khan’s “Ain’t Nobody” and “Closer to Fine” by The Indigo Girls.

More modern cuts include “The First Cut Is the Deepest” by Sheryl Crow, “So Sorry” by Feist and the devastating Coldplay’s “The Scientist” to accompany that dreadful cliffhanger ending. 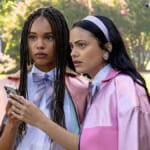 Also Read:
Here Are All the Songs in ‘Do Revenge’

Here are all the songs in “Firefly Lane” Season 2 Part 1.

Here is a playlist with most of the needle drops that layer “Firefly Lane.”