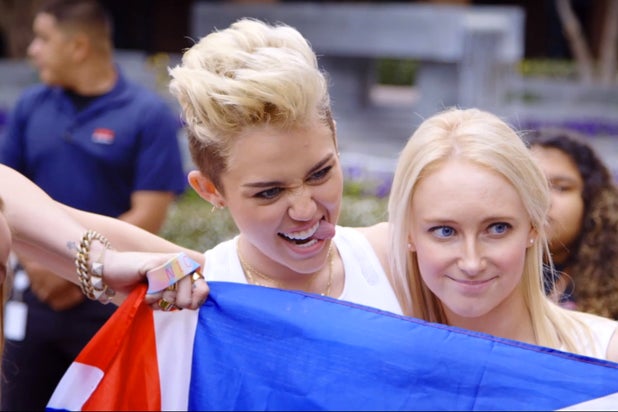 Miley Cyrus‘ movements at the MTV Video Music Awards brought twerking and foam fingers into our national consciousness, and she’s not done yet — an hour-long documentary about controversial performer is set to air on MTV on October 2.

If you’ve ever wondered “who is the real Miley and what is driving her transformation?” then MTV has a treat for you.

First of all, you should know that Cyrus thinks she was “like, born to become who I am, like, right now.”

Second, there’s a clip of her talking to Britney Spears about how everyone “takes the VMAs so serious and I just want to come out and like shoot a hot dog gun.” Spears agrees, because things were so well for her after her own controversial VMA moments.

“Miley: The Movement” follows the last four months of Cyrus’ life, promising to “capture the full essence and evolution of Cyrus as she gears up for the release of her debut RCA Records album, “Bangerz” on Tuesday, October 8,” according to the press release.

Also read: Miley Cyrus’ VMAs Twerk-er Fallout: Robin Thicke’s Wife’s Down With It — Pink, Cher, Not So Much (Video)

And yes, that will include the full essence of her VMA performance. For example, we’ll get to see the Teddy teddy-clad singer exclaim “I’m nervous as a motherfucker! I’m not gonna lie!” on her way onto the stage that fateful night.

“You’re always going to make people talk,” Cyrus explains. “You might as well make them talk for, like, two weeks rather than two seconds.”