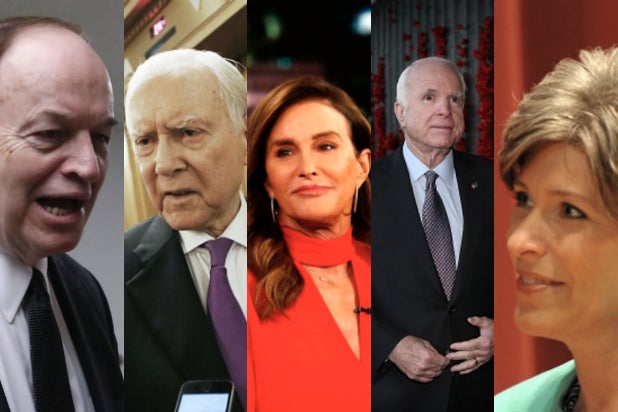 President Trump, who avoided serving in Vietnam thanks to college and bad feet that weren’t bad enough to keep him from playing sports, announced early Wednesday morning that he had decided not to allow transgender people to serve “in any capacity.”

Unsurprisingly, Democrats disagreed. But many Republicans also split with Trump. Here are a few:

The 20-year military veteran, who served in Iraq, believes that anyone qualified should be allowed to serve, her spokeswoman told the Des Moines Register.

“I don’t think we should be discriminating against anyone. Transgender people are people, and deserve the best we can do for them,” Hatch’s office tweeted.

Senator Hatch's full comments on the issue of transgender Americans in the military. #utpol pic.twitter.com/EDS6JRXJaj

“Any American who meets current medical & readiness standards should be allowed to continue serving,” McCain tweeted, adding in a statement, “The President’s tweet this morning regarding transgender Americans in the military is yet another example of why major policy announcements should not be made via Twitter.”

On CNN, he praised current military policy of “a big tent for people who want to serve.”

“You’ve got to remember, our military force is a voluntary force,” he said. “I’ll have to see what he actually said, read his tweet and go from there from current policy. … You ought to treat everybody fairly and give everybody a chance to serve.”

The congresswoman, who has a transgender son, was one of the first Republicans to say that no one should be prohibited from serving. She is not running for re-election.

No American, no matter their sexual orientation or gender identity, should be prohibited from honor + privilege of serving our nation #LGBT

Arguably the most famous transgender woman in America, who has considered a run for the Senate, said Trump broke a promise to transgender Americans.

There are 15,000 patriotic transgender Americans in the US military fighting for all of us. What happened to your promise to fight for them? https://t.co/WzjypVC8Sr

(It’s unclear where Jenner got the 15,000 figure; a RAND study estimates the number of transgender service members between 1,320 and 6,630.)

Of course, there was skepticism that the Republicans would continue to oppose Trump when push comes to shove. In the words of @LOLGOP, who is, full disclosure, an old friend:

Boy, is John McCain going to be furious about Trumps tragic transgender policy as he completely goes along with it.

We’ll update this list with more opponents (or any flip-flops) as they emerge.