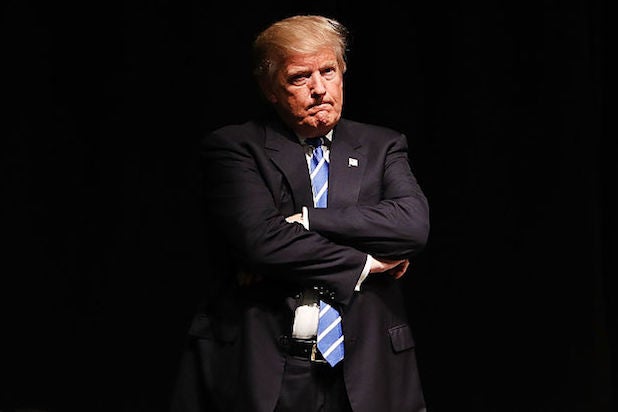 Donald Trump’s remarks about women have Republicans lining up to give their presidential nominee a swift kick to the curb.

There are no excuses for Donald Trump’s offensive behavior. Cindy & I will not vote for him. My full stmt: https://t.co/MOw0rx4LSI

Others have called on Trump to withdraw, including former Secretary of State Condoleezza Rice, who posted on Facebook: “Enough! Donald Trump should not be President. He should withdraw. As a Republican, I hope to support someone who has the dignity and stature to run for the highest office in the greatest democracy on earth.”

For the benefit of the country, the party and his family, and for his own good, @realDonaldTrump should withdraw. More and worse oppo coming

Other notable Republicans rescinding their vote:

As proud as I am to label myself a Republican, there is one label that I hold above all else – American. My full statement: pic.twitter.com/biRvY8S3aZ

I will not vote for Donald Trump. Read my statement here: pic.twitter.com/F8zajgDZpg

I can no longer endorse Donald Trump. Read my full statement: pic.twitter.com/lfa9mYZbdC

Senate candidate Rep. Joe Heck of Nevada was booed when he told a crowd Saturday, “I accept that none of us are perfect. Surely I am not infallible. However, I can no longer look past the pattern of behavior and comments that have been made by Donald Trump. Therefore I cannot in good conscience continue to support Donald Trump, nor can I vote for Hillary Clinton. My wife, my daughters, my mom, my sister and all women deserve better. All Americans deserve better.”

Donald Trump's behavior makes him unacceptable as a candidate for president, and I won't vote for him.

I cannot and will not support Donald Trump for president. He has forfeited the right to be our party’s nominee.

Here are statements from other Republican leaders who have have condemned Trump.

Speaker of the House Paul Ryan: “I hope Mr. Trump treats this situation with the seriousness it deserves and works to demonstrate to the country that he has greater respect for women than this clip suggests. In the meantime, he is no longer attending tomorrow’s event in Wisconsin.”

Senate Majority Leader Mitch McConnell: “These comments are repugnant and unacceptable in any circumstance. As the father of three daughters, I strongly believe that Trump needs to apologize directly to women and girls everywhere, and take full responsibility for the utter lack of respect for women shown in his comments on that tape.”

These comments are disturbing and inappropriate, there is simply no excuse for them.

Every wife, mother, daughter — every person — deserves to be treated with dignity and respect. https://t.co/AVSEBastVc

Hitting on married women? Condoning assault? Such vile degradations demean our wives and daughters and corrupt America's face to the world.

Make no mistake the comments were wrong and offensive. They are indefensible.

Donald’s comments were vulgar, egregious & impossible to justify. No one should ever talk about any woman in those terms, even in private.
— Marco Rubio (@marcorubio) October 8, 2016

Reince Priebus, the chairman of the Republican National Committee: “No woman should ever be described in these terms or talked about in this manner. Ever.”

Among Republicans who came close to calling on Trump to withdraw were Sen. Shelley Moore Capito from West Virginia, who said: “As a woman, a mother, and a grandmother to three young girls, I am deeply offended by Mr. Trump’s remarks, and there is no excuse for the disgusting and demeaning language. Women have worked hard to gain the dignity and respect we deserve. The appropriate next step may be for him to reexamine his candidacy.”

“In addition to my well known differences with Donald Trump on public policy issues, I have raised questions about his character after his comments on Prisoners of War, the Khan Gold Star family, Judge Curiel and earlier inappropriate comments about women. Just this week, he made outrageous statements about the innocent men in the Central Park Five case.”

“As I said yesterday, there are no excuses for Donald Trump’s offensive and demeaning comments in the just released video; no woman should ever be victimized by this kind of inappropriate behavior. He alone bears the burden of his conduct and alone should suffer the consequences.”

“I have wanted to support the candidate our party nominated. He was not my choice, but as a past nominee, I thought it was important I respect the fact that Donald Trump won a majority of the delegates by the rules our party set. I thought I owed his supporters that deference.”

McCain added: “But Donald Trump’s behavior this week, concluding with the disclosure of his demeaning comments about women and his boasts about sexual assaults, make it impossible to continue to offer even conditional support for his candidacy. Cindy, with her strong background in human rights and respect for women fully agrees with me on this.”

“Cindy and I will not vote for Donald Trump. I have never voted for a Democratic presidential candidate and we will not vote for Hillary Clinton. We will write in the name of some good conservative Republican who is qualified to be President.”

Although Trump’s biggest cheerleader, Rudy Giuliani, has yet to comment, his daughter Caroline has made her public declaration that she’s voting for Hillary Clinton.