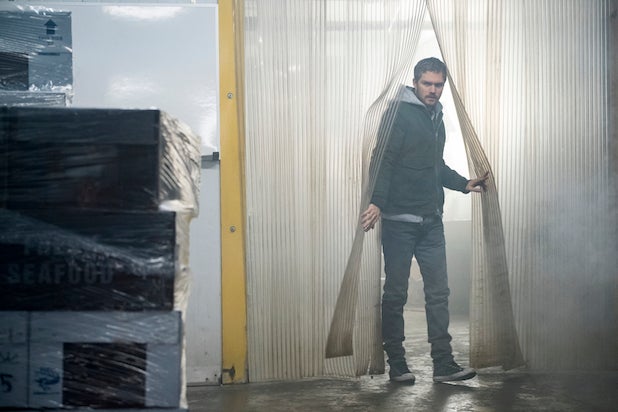 School’s back in session, and so are several of your favorite Netflix original series.

“Marvel’s Iron Fist” and “Atypical” return for sophomore seasons on Sept. 7, and the second season of “American Vandal” will hit the streamer a week later on Sept. 14. “Norm MacDonald Has a Show” will drop that day as well, and limited series “Maniac,” starring Emma Stone and Jonah Hill will arrive on the 21.

Netflix will also release some new movies, including “Sierra Burgess Is a Loser” on Sept. 7, “Nappily Ever After” on the 21, and “Hold the Dark” on the 28.

See below for the complete list of titles coming to and leaving Netflix next month.

La Catedral del Mar– NETFLIX ORIGINAL
In 14th-century Barcelona, a serf’s determined climb to wealth and freedom incurs the disdain of the noble class and the suspicion of the Inquisition.

Monkey Twins– NETFLIX ORIGINAL
Inspired by Khon dance drama and Thai martial arts, a fighter scarred by the past joins forces with a determined cop to battle an organized crime ring.

Mr. Sunshine– NETFLIX ORIGINAL  (Streaming Every Saturday)
A young boy who ends up in the U.S. after the 1871 Shinmiyangyo incident returns to Korea at a historical turning point and falls for a noblewoman.

The Hitchhiker’s Guide to the Galaxy

The Texas Chainsaw Massacre: The Beginning

Once Upon a Time: Season 7

Atypical: Season 2– NETFLIX ORIGINAL
While Elsa and Doug face the aftermath of their marriage crisis and Casey tries to adjust to her new school, Sam prepares for life after graduation.

City of Joy– NETFLIX ORIGINAL
Women who’ve been sexually brutalized in war-torn Congo begin to heal at City of Joy, a center that helps them regain a sense of self and empowerment.

With the defeat of the Hand, Chinatown is left vulnerable to turf wars, and Danny must protect the streets of New York.

Next Gen– NETFLIX FILM
A friendship with a top-secret robot turns a lonely girl’s life into a thrilling adventure as they take on bullies, evil bots and a scheming madman.

Stretch Armstrong & the Flex Fighters: Season 2– NETFLIX ORIGINAL
Wrongly accused for the attack on Rook Tower, the Flex Fighters must protect their city as wanted men. Will Charter City ever trust them again?

The Most Assassinated Woman in the World– NETFLIX FILM

In 1930s Paris, an actress famous for her gory death scenes at the Grand Guignol Theater contends with a mysterious stalker and ghosts from her past.

Daniel Sloss: Live Shows– NETFLIX ORIGINAL
The dark mind of Daniel Sloss is back, and he’s ready to find the funny in some very taboo topics, from the deeply personal to the highly irreverent.

Risking his family and future, a banker in occupied Amsterdam slows the Nazi war machine by creating an underground bank to fund the resistance.

At Korea’s top university medical center, ideals and interests collide between a patient-centered ER doctor and the hospital’s newly-appointed CEO.

On My Skin– NETFLIX FILM

Arrested for a drug-related offense, Stefano Cucchi suffers at the hands of Italy’s Carabinieri police and a broken legal system. Based on true events.

American Vandal: Season 2– NETFLIX ORIGINAL
In the wake of the first documentary’s success, Peter and Sam seek a new case and settle on a stomach-churning mystery at a Washington high school.

Bleach– NETFLIX FILM
When high schooler Ichigo is suddenly given reaper abilities, he really wants to give the powers back. But he’ll have to reap some souls first.

BoJack Horseman: Season 5– NETFLIX ORIGINAL
BoJack’s back on screen as the star of “Philbert,” a new detective series produced by Princess Carolyn. But his demons are out in full force.

Car Masters: Rust to Riches– NETFLIX ORIGINAL
The colorful crew at Gotham Garage overhauls an eclectic collection of cars, trading their way up to a showstopper they can sell for big bucks.

Ingobernable: Season 2– NETFLIX ORIGINAL
Emilia takes on the leader of a drug trafficking empire in her fight to reunite her family and reduce corruption in her country.

The Angel– NETFLIX FILM
While operating at the highest levels of Egypt’s government, Ashraf Marwan walks a dangerously thin line as a spy for Israel. Based on a true story.

The Dragon Prince– NETFLIX ORIGINAL
Two human princes forge an unlikely bond with the elven assassin sent to kill them, embarking on an epic quest to bring peace to their warring lands.

The Land of Steady Habits– NETFLIX FILM
After leaving his wife and his job to find happiness, Anders begins a clumsy, heartbreaking quest to reassemble the pieces of his fractured life.

The World’s Most Extraordinary Homes: Season 2 Part A– NETFLIX ORIGINAL

Piers and Caroline head to Portugal, Switzerland, Japan and the United States to tour more one-of-a-kind homes with extraordinary architecture.

Inside The Freemasons: Season 1

Scott Pilgrim vs. the World

Battlefish– NETFLIX ORIGINAL
Over the course of the fishing season, a group of fishing boats pursues the lucrative albacore tuna in the competitive waters off the Oregon coast.

Hilda– NETFLIX ORIGINAL
Join Hilda as she travels from a wilderness full of elves and giants to Trolberg, a bustling city packed with new friends and mysterious creatures.

Nappily Ever After– NETFLIX FILM

Violet has it all: the perfect job, the perfect relationship and the perfect hair. Until she doesn’t. What happens when being perfect isn’t enough?

Quincy– NETFLIX ORIGINAL
The life and career of legendary music producer Quincy Jones are traced in this biographical documentary directed by his daughter, Rashida Jones.

Honest cop Tony Jr. gets advice from his unscrupulous father, retired NYPD officer Tony Sr., about everything from his job to his love life.

Disney’s A Wrinkle in Time

Disney’s Pirates of the Caribbean: The Curse of the Black Pearl

The sea road to the west has been found, but Norheim’s villagers must still cope with power struggles and the ever-present threat of Jarl Varg.

El Marginal: Season 2– NETFLIX ORIGINAL
Set three years before the first season, this award-winning Argentine series explores the backstory of criminals and cops operating in the shadows of San Onofre.

Kai grows up playing an old piano discarded in the woods; Shuhei’s father is a famous pianist. Their chance meeting transforms their lives and music.

Hold the Dark– NETFLIX FILM
Summoned to a remote Alaskan village to search for wolves that took a local boy, a naturalist soon finds himself caught in a harrowing mystery.

This season, Jack and his not-so-adventurous dad, Michael, tackle Europe, including the Bavarian Alps, Istanbul, Budapest, Romania, Moldova and Ukraine.

Lessons From A School Shooting: Notes from Dunblane– NETFLIX ORIGINAL
Devastated by the school shooting in his town, a priest from Sandy Hook, Connecticut, bonds with a Scottish priest who experienced a similar tragedy.

Lost Song– NETFLIX ORIGINAL
War looms over the kingdom of Neunatia, where two young women are both burdened and blessed by the power of song.

Made in Mexico– NETFLIX ORIGINAL
Get to know the opulent lifestyles and infamous dynasties of Mexico City’s socialites and the expats vying for a spot in their exclusive social order.

Reboot: The Guardian Code: Season 2– NETFLIX ORIGINAL
With Megabyte, Hexadecimal and the evil Sourcerer still at large, the rebooted Guardians face a new season of threats — both at home and online.

After the death of their parents, two sisters move back to their childhood home, where one sibling claims to be able to see a dark presence.

Lawmakers and activists with conflicting ideologies speak about the complexities of Catalonia’s politics and the fight for its independence from Spain.

A Royal Night Out

I Now Pronounce You Chuck and Larry

Stuart Little 3: Call of the Wild

A Star Is Born

Before the Devil Knows You’re Dead