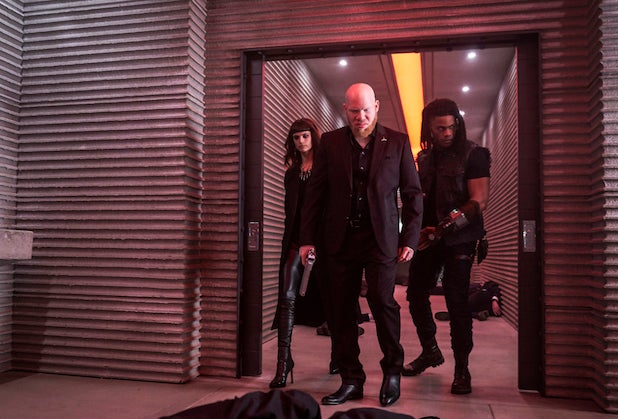 As “Black Lightning” fans will know, there are plenty of similarities between The CW’s drama and the DC comics: Jefferson Pierce (Cress Williams) is a former Olympic athlete-turned principal of Garfield High who fights a local gang called The Hundred as super hero Black Lightning. His biggest nemesis is Tobias Whale (Marvin Jones III), who killed his father.

As Season 1 has progressed, we learn that Peter Gambi, who created Jefferson’s suit and practically raised him after his father’s death, has a secretive past.

Gambi was tasked in the 1980s by a group called A.S.A. to round up super-humans, but leaked their information to Jefferson’s father, Alvin Pierce, when he learned that their “vaccinations” were killing children. When he found out Jefferson was someone the organization would be after, he practically raised Jefferson after Alvin was murdered.

In the comics, it was Gambi himself who killed Alvin, and he sacrifices his life by jumping in front of a bullet to save Jefferson’s life. The act is also one of penance because of his guilty secret about Alvin’s death.

In the Season 1 finale on Tuesday, Gambi doesn’t get shot — in fact, he ends up shooting and killing Martin Proctor (Gregg Henry), who it was revealed has been rogue and no longer working for the government. Jefferson’s wife Lynn alerts the press to Proctor’s experiments, and the Pierce family returns home.

Tobias has gotten away and is still alive, and the season ends with Tobias opening Proctor’s briefcase — using the dead man’s severed thumbs — and declaring himself the king of Freeland.

Also Read: Marvin Jones Says 'Black Lightning' 'Is a Direct Reflection of What Is Happening in Our World' (Video)

Of course, the show isn’t based on a particular book, and is inspired by the comics, not an exact recreation. But looking ahead to season 2, keeping your eyes on the books might be a good idea, as showrunner Salim Akil recently teased TV Line with this:

“What I will say about the second season is I think I’m going to try to do it in a way that allows people to almost ‘read a comic,’ you know what I mean? The season will arc out in a different way.”

Looking ahead to “Black Lightning” comic story lines that might take place after Season 1: at one point, Jefferson is offered a spot on the Justice League, but he ultimately turns it down. It would be interesting to see other superheroes from the DC universe appear on The CW drama — especially because Jones told TheWrap that he’d love to see Tobias Whale battle Batman.

Later on in the comics, Black Lightning joined a team called The Outsiders, which involved several other DC heroes like Metamorpho, Geo-Force, Katana, Halo and Looker. After a stint as Lex Luthor’s secretary of education, Jefferson did end up taking a spot on the Justice League of America.