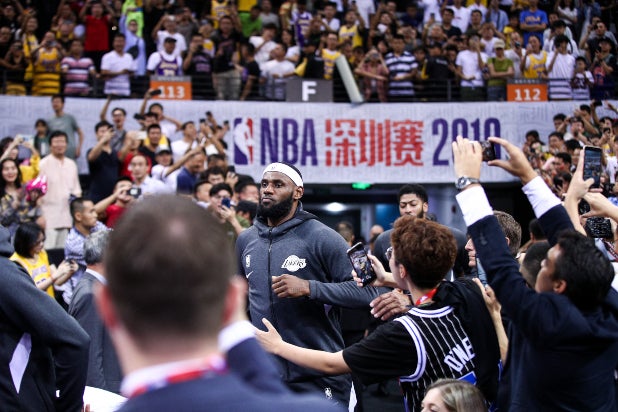 The NBA tips off its 2019-2020 season on Tuesday night, with the Toronto Raptors beginning their first-ever NBA title defense, and the Los Angeles Clippers’ first attempt to create a true rivalry with its more glitzy cross-town brethren Lakers. But the league’s ongoing crisis with China over a team executive’s pro Hong Kong tweet threatens to overshadow the festivities.

Ever since Houston Rockets general manager Daryl Morey tweeted support of the protests in Hong Kong in early October, enraging the Communist Chinese government, the ensuing fallout has dominated national news headlines. And the league’s national TV partners, Turner and ESPN, find themselves caught in the middle.

For Turner, whose TNT airs not only Tuesday night’s doubleheader, but also has a Rockets game slated for Thursday, the situation is unavoidable.

Turner executives understand this is a timely news story. Given the network’s studio show, “Inside the NBA,” has historically not shied away from addressing sensitive topics, viewers can expect them to cover it during their 2.5 hour pregame show on Tuesday, according to a network source. As far as during the game on Thursday, it will be mentioned as one of many offseason storylines during the telecast. NBA Commissioner Adam Silver will also be interviewed as part of TNT’s pregame coverage on Thursday.

A network source at ESPN told TheWrap that they will address the issue when it’s warranted, as the network has been doing since the story began, but “through a sports lens as always,” the source added. ESPN tips off its season coverage on Wednesday, with another doubleheader on Friday.

The continued fallout from Morey’s tweet threatens to strain what has been a very lucrative business relationship for the NBA with China. It has also raised fears of those who have become wary of Chinese influence over American media and business.

Morey’s Oct. 4 support of Hong Kong, where he wrote in a since-deleted tweet: “Fight for Freedom. Stand With Hong Kong” — was immediately criticized by the Chinese government. The Chinese Basketball Association (CBA) suspended all cooperation with the Rockets, which is among the most popular teams in China. The Chinese Media Group, the country’s state-controlled media arm, said it was “deeply shocked by the erroneous comments” made by Morey. Tencent Sports, which signed a five-year, $1.5 billion contract to continue as the NBA’s streaming partner in China, no longer offers live-streams of Rockets games and has suspended all news coverage of the team.

The Rockets are more closely tied to China. Yao Ming, who played his entire career with the Rockets, is currently the head of the CBA.

The Lakers and Brooklyn Nets played two exhibition games that following week in China, though there were fears of the games being called off entirely — other NBA events in the Communist nation were cancelled in the days prior. But NBA billboards and other advertisements were taken down all throughout China. Pro Hong Kong and Free Tibet activists staged a peaceful demonstration during a separate Nets preseason game in Brooklyn last week.

Last week, at the Time 100 Health Summit in New York, Silver said that China had asked the NBA to fire Morey over the tweet. He said there was “no chance that’s happening,” adding further that they wouldn’t even discipline him for the tweet. According to the South China Morning Post, in a commentary, China’s state-run TV station CCTV said Silver could face “retribution” for defaming China and supporting Daryl Morey.

The protests in Hong Kong, which first began in March before growing to its current scale in June, come as a result of a proposed extradition law. This bill would allow criminal suspects in Hong Kong to be sent to China to face trial. Activists argue the bill would threaten legal rights that Hong Kong residents have under the current “one country, two systems” framework.

Brooklyn Nets owner Joe Tsai, who is also the co-founder of Chinese e-commerce giant Alibaba, said in a lengthy post on his Facebook page, it “will take a long time to repair” the damage caused by Morey’s comments. “There are certain topics that are third-rail issues in certain countries, societies and communities,” he said. “Supporting a separatist movement in a Chinese territory is one of those third-rail issues, not only for the Chinese government, but also for all citizens in China.”