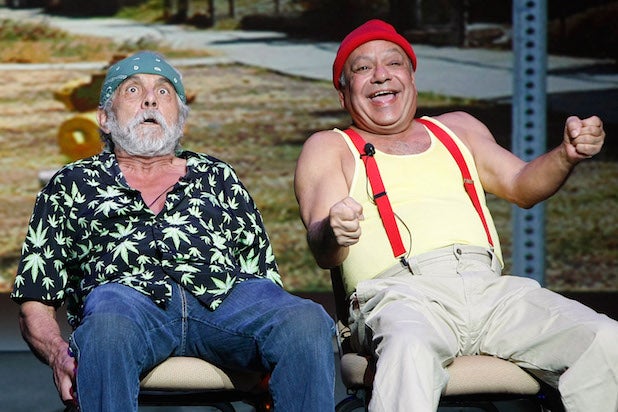 When Cheech Marin was promoting 1987’s “Born in East L.A.,” his first without Tommy Chong, he invited a critic to watch the film and to interview him. But Marin said the reaction he got from the journalist made his jaw drop.

For much of his career, Marin has had to shake the perception that he is not his stage or screen persona Pedro. And he even fooled a film critic into thinking he was someone other than a performer.

Also Read: How Cheech and Chong's 'Up in Smoke' Changed the World, One Hit at a Time

“It’s called acting,” Marin said. “If it helps with a good review, I’ll speak with an accent up the ass!”

Chong, on the other hand, well that’s a different story. TheWrap asked Tommy Chong himself if he thinks he’s closer to his own stage persona than his comedy partner.

For most of their respective careers, when people think of Cheech and Chong, they imagine long-haired, dope-fiend hippies, with Cheech in his too-small tank top and bright red overalls and beanie, and Chong in a colorful headband and denim outfit. But those are Pedro and Man, two of their most iconic characters and not literally Cheech Marin and Tommy Chong.

“The misconception of Cheech is that he was that Low Rider,” Chong said. “No, in real life he’s a college genius! High IQ, winner of ‘Celebrity Jeopardy.’ He’s a world-renowned art collector. So Cheech borders on genius.”

With that said, Marin said that he never smoked pot while working, whether on stage or on set. Being professional in his comedy is what makes it appear so effortlessly funny and relaxed.

“No. Not me anyways. I can’t vouch for Chong,” Marin said. “It is a very physically and mentally torturous process. It goes 18-20 hours a day, and if you’re stoned during that whole period, you’re not going to make a good movie, because you just won’t have the stamina to physically and mentally do that. And it’s every day. So we didn’t get stoned making the record, never stoned on stage. But we were very disciplined artists about what we were doing. It didn’t magically happen. Well, it did magically happen, but not without effort.”

Marin was right not to vouch for Chong, because when we asked him, he thinks Cheech might be blowing a little smoke.

“I love Cheech. He doesn’t get high. He still cracks me up. He used to be an altar boy. And I don’t know if the priest is up to him or what. But every once in a while, he would go into this holier than thou bulls—,” he said. “I’ve gotten high every chance I get. ‘Up in Smoke,’ ‘Still Smokin,’ ‘Next Movie,’ it’s part of my routine…And I couldn’t have done anything, the records or the movies, without the assist of some good bud.”

And yet Chong too wasn’t always the long-haired hippie that he thinks of himself as today. Chong says he drew inspiration for his character from a homeless man named Strawberry he let stay in his Vancouver nightclub’s lighting room. But before that, Chong once played in a Motown, soul band, Bobby Taylor and the Vancouvers. He wore short hair, matching, robin egg blue suits and horn-rimmed glasses. But everything changed for him when he met Jimi Hendrix.

“When we met Hendrix, everyone started dressing like Hendrix. We all had separate outfits, doing our hair long. And I changed so radically that when I got back to Vancouver, they wouldn’t let me back into my own club because they didn’t recognize me,” Chong said.

Ahead of the 40th anniversary of their first movie “Up in Smoke,” Cheech and Chong continue to perform live shows in a vaudevillian-style. They sing, they work the crowd, and they play their hits, showcasing their versatility as performers. But to this day, they do interviews with people who only think of them as just Pedro and Man. Even though they’ve been performing together for decades, the duo still get asked of their live shows, “What exactly do you do?”

“It’s all for the love of the art,” Chong said. “With Cheech and Chong, you’re never going to get the same thing twice. What they do and what they might be is different, but the whole mindset will never change. That’s really what defines us.”