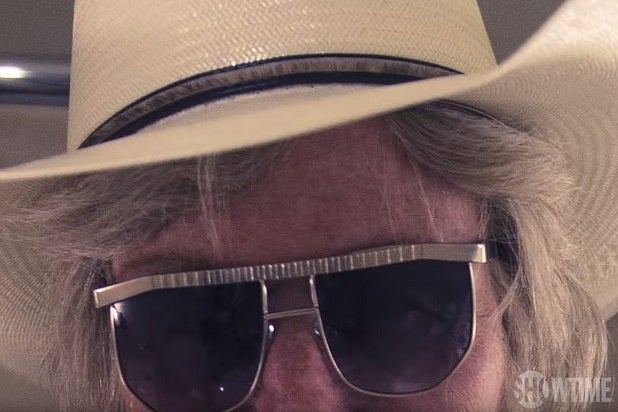 Turns out, comedian and provocateur Sacha Baron Cohen has been secretly filming a new TV show for a year. And it airs this week. And there’s almost no information about it — but there are some potential clues.

On Monday, Showtime announced the show, called “Who Is America?” with a teaser video full of flashes of imagery that might suggest where Baron Cohen is going with this new project. This includes a promo by former Vice President Dick Cheney, who teases that he’s an interview subject in the first episode of “Who is America?”, airing July 14.

Here’s the description of the show from the press release: “In the works over the past year, the seven-episode series will explore the diverse individuals, from the infamous to the unknown across the political and cultural spectrum, who populate our unique nation.”

Also Read: Michelle Wolf: Trump 'Responsible for More Abortions Than the Invention of Back Alleys'

The press release also includes a shot of Baron Cohen with his head shaved, in a pose that suggests he’s playing a documentary filmmaker character, framing a shot while also holding the crank handle of an old movie camera.

From the description, the teaser and the title, it seems Baron Cohen’s next project is likely political satire like his past work with characters like Borat and Ali G. The Showtime teaser video includes politically charged imagery from America in the post-2016 election era, and it can’t be a coincidence that a figure so controversial as Cheney, who served as Vice President under George W. Bush, is the first guest.

Also Read: Michelle Wolf: Ivanka Trump Is Like Herpes, She 'Always Shows Up When We're About to Get F--ed' (Video)

It also seems to suggest that Baron Cohen has a new character in mind for the show — the video uses the phrase, “Sacha Baron Cohen returns in a series as you’ve never ever seen him before.”

The word “ever” is repeated five different times, each time over a different, tough-to-parse close up of a person. One of those shots, of a severe-looking man with a unibrow, appears to be the same character in the image Showtime shared in its press release. That raises an important question: Who is shown in those other shots? Is Baron Cohen introducing multiple characters in this new show?

It would appear that multiple new Baron Cohen characters is a distinct possibility. In the Showtime teaser video, there’s a shot of someone who appears to be Baron Cohen, wearing big sunglasses and a cowboy hat; a close shot of a hand with a number of rings on it; a shot of a pink “pussyhat” worn by many protesters during the Women’s March following Donald Trump’s inauguration in January; and a shot of a blond-haired older man with a face tattoo, who also could be a made-up Baron Cohen.

Also Read: Michelle Wolf: 'Trump Doesn't Want to Be Allies With Anyone Who's Good-Looking'

On Twitter, Baron Cohen also shared another teaser video for “Who is America?” that could potentially back up the multiple characters theory. It contains a number of fast flashes that appear to be Baron Cohen playing a number of characters, including the filmmaker character wearing a camouflage ghillie suit, a blonde man that could be Baron Cohen’s Brüno character, a shot of Baron Cohen fixing a gray mustache while wearing what looks like one of the rings from the Showtime teaser, and a brief shot of the person with the face tattoo.

We also see someone hold up a picture of President Barack Obama photoshopped to look like Osama Bin Laden, and then a snippet of the interview with Cheney. We hear Baron Cohen, speaking in a tough-to-place accent, ask Cheney to sign his “waterboarding kit” — which Cheney does.

Also Read: 19 Times Donald Trump and Co. Were Confused About History, Including Canada Burning Down the White House (Photos)

Another piece of the puzzle that might give an idea of the political focus of “Who is America?” and it also comes from Baron Cohen’s Twitter account. That account only includes two tweets, in fact: the video above, and another teaser video posted on July 4.

A message from your President @realDonaldTrump on Independence Day pic.twitter.com/O2PwZqO0cs

The second video goofs on Donald Trump himself, playing a clip from 2012 in which Trump talks about how he’d like to see Baron Cohen punched in the face “so many times that he’d wind up in a hospital.” Trump goes on to say that Baron Cohen should go back to school to “learn about being funny” because “you don’t know s—.” Baron Cohen interviewed Trump as his character Ali G on “Da Ali G Show” back in 2003, which Trump walked out of after the Baron Cohen character tried to pitch him on a business idea: ice cream gloves.

Trump claimed on Twitter in 2012 that he was the only person to ever immediately walk out of an Ali G interview, but Baron Cohen disputed that claim.

The video ends with the message “Sacha graduates, soon,” and then a shot of the logo for Trump University, Trump’s for-profit education company that was not an accredited college, and which was hit by multiple lawsuits from former students that alleged the company engaged made false claims about the education it offered, and racketeering. Trump settled those lawsuits, and the company is now defunct.

Apparently, Cheney isn’t the only political figure Baron Cohen has punked with his new show. Former vice presidential candidate and Alaska governor Sarah Palin admitted on Facebook she was duped by Baron Cohen. She said Baron Cohen interviewed her while posing as a U.S. military veteran, in heavy makeup, and using a wheelchair.

“For my interview, my daughter and I were asked to travel across the country where Cohen (I presume) had heavily disguised himself as a disabled US Veteran, fake wheelchair and all,” Palin wrote on Facebook. “Out of respect for what I was led to believe would be a thoughtful discussion with someone who had served in uniform, I sat through a long “interview” full of Hollywoodism’s (sic) disrespect and sarcasm – but finally had enough and literally, physically removed my mic and walked out, much to Cohen’s chagrin.”

Palin’s response to the news came after The Hill reported on a tweet by right-wing news aggregator Matt Drudge advising that several people on both sides of the political aisle had gotten tricked by Baron Cohen.

Sacha Baron Cohen at it again! This time for CBS/SHOWTIME. Lots of tricks played. Both Republicans and Democrats are getting caught up in the madness. Sacha has finked Cheney, Palin, Howard Dean, Alberto Gonzales, Bernie, Trent Lott, Patraeus, Ted Koppel, and more… BEWARE!

So it seems Baron Cohen is digging into the current political climate and Trump presidency, the #Resistance backlash, and other recent events. He also has at least one new character, and possibly even more. Going back to Showtime’s description of the show and the line, “the seven-episode series will explore the diverse individuals, from the infamous to the unknown across the political and cultural spectrum, who populate our unique nation” — it seems as though those “diverse individuals” could all be Baron Cohen characters.

Showtime is playing most of the details about the show close to the vest, however — we’ll have to wait until July 14 to fully find out what the deal is, it seems.