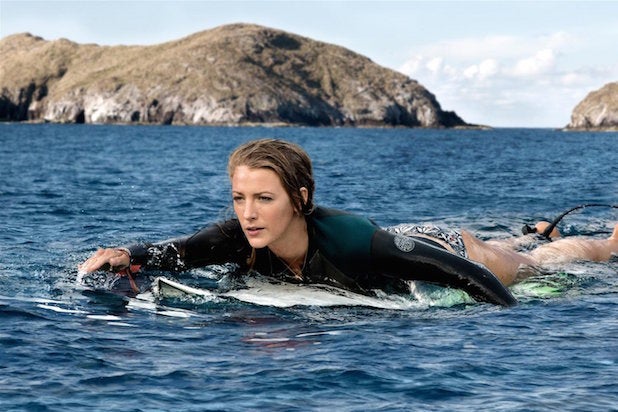 Made on a modest production budget of $17 million, “The Shallows” has emerged as the little ocean thriller that could, earning an estimated $16.7 million upon opening and expected to keep chugging into next weekend.

“It seemingly came out of nowhere and chewed up the box office,” said Paul Dergarabedian, comScore senior analyst. “Some movies swim a bit under the radar,” he told TheWrap, attributing its big first weekend to a modest budget, big concept and great reviews.

“With so many wide release titles opening in theaters since the beginning of summer, it’s been hard to rise above all that noise,” he added.

“The Shallows” shares some uncanny similarities with Steven Spielberg‘s surprise 1975 hit “Jaws” — not only thematically but also financially. Made for $7 million, the classic shark thriller made back its production budget — nearly to the exact dollar — upon opening, too. (Of course, it went on to become the highest-grossing movie of the year all those decades ago.)

“To gross almost the amount of production cost in your opening weekend, it’s always a good thing,” said Rory Bruer, president of worldwide distribution at Sony — the studio that distributed the Columbia Pictures film.

Also Read: 'The Shallows' Is 'The Best Shark Movie' Since 'Jaws,

The film has also been received quite warmly from critics. Most seem to agree “The Shallows” is a solidly entertaining and suspenseful summer popcorn flick, with a Rotten Tomatoes score of 74 percent.

Blake Lively plays the lead as a surfer who gets attacked by a great white shark. In some ways, it turns the opening scene of “Jaws” on its head; in the original shark thriller, the female swimmer dies in a prelude to more attacks. But in this modern shark films, Lively’s character enters a protracted fight for her life with the sharp-toothed sea creature.

Also Read: 'The Shallows' Review: Blake Lively Vs Shark Is a Fairer Fight Than You'd Imagine

Sony credits Lively’s star power with helping the opening exceed predictions. She has 9.1 million Instagram followers, after all, and 1.9 million Facebook fans. The film capitalized on her celebrity as she did the talk show circuit along with a Marie Claire cover and an E! Instagram takeover.

Directed by Jaume Collet-Serra, who made the 2009 horror movie “Orphan,” “The Shallows” benefited from savvy marketing, Bruer told TheWrap.

“We really had great tentacles — no pun intended,” said the Sony exec with a laugh during a Sunday morning call. He cited an online blitz geared to several demographics. Marketing included a female empowerment message, customized video content on Twitter, Instagram, Snapchat, YouTube and Facebook, plus a presence on sites popular with millennials: Buzzfeed, Refinery 29, Jukin and Vice.

Partnerships with sites like Buzzfeed and other social influencers amounted to 18 million fans reached around the film’s June 21 world premiere alone.

Sony credits worldwide marketing and distribution president Josh Greenstein with overseeing the campaign (also responsible for moving the release date forward a week). Ironically, the film’s successful marketing news comes less than a week after Dwight Caines’s exit from president of domestic marketing. Sony announced it is replacing Caines with Christine Birch in the role.

Sony also pointed to producers Lynn Harris and Matti Leshem for finding the project in the first place and bringing Collet-Serra on board as director.

As it continues on in theaters next weekend, we will find out soon enough how “Jaws”-like “The Shallows” gets at the box office.