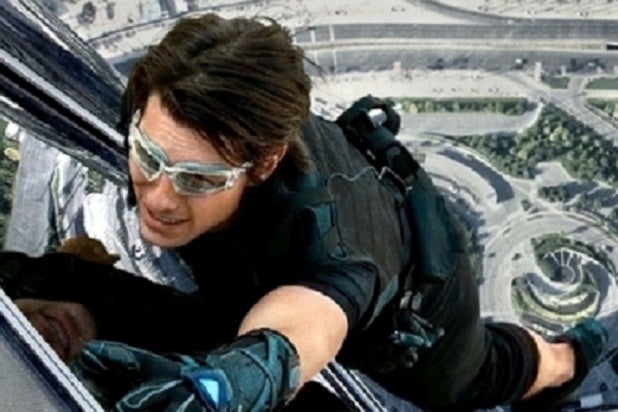 A better shot at a lucrative run in Imax theaters was one very big reason Paramount moved the release date for Tom Cruise’s “Mission: Impossible 5” up to July 31.

The action sequel had been scheduled to debut on Christmas Day, one week after “Star Wars: The Force Awakens” hits theaters on Dec. 18. But Monday’s shift of “MI5” means Paramount not only avoids direct competition with Disney’s blockbuster-to-be, it also gives it a shot at Imax’s 338 theaters, which have been committed to “Star Wars” over the holidays.

None of the parties involved were commenting Tuesday, but the ticket premiums from the giant screen chain and PLF screens have played an increasingly large role in the success of breakout movies recently, and maximizing those returns makes sense.

See photo: 50 Actors Over 50 Who Are Still Conquering Hollywood

Roughly 10 percent of the record-breaking $204 million domestic box office grosses for current No. 1 movie “American Sniper” have come from 333 Imax theaters, which have also dominated the list of locations providing the biggest returns. With roughly 380 PLF screens doing the same sort of business, over-sized screens have provided nearly a fifth of the haul generated by the Iraq War saga from Warner Bros.

That studio’s action remake “Point Break” is currently penciled in for Imax theaters on the July 31 weekend, but that’s not set in stone and there’s little doubt that “Mission: Impossible 5” would be more attractive.

“We believe ‘Mission Impossible’ would clearly trump ‘Point Break’ as a choice for the July 31 slot,” said B. Riley analyst Eric Wold Tuesday. “Not only did Imax successfully play the last ‘Mission Impossible’ film in December 2011, but Imax cameras were used to shoot some of the film’s key scenes, indicating a solid relationship with both the studio and fans on this franchise.”

“Mission Impossible: Ghost Protocol” was a hit for Paramount, taking in $209 million domestically and $485 million from abroad. In all, the franchise has generated more than $2 billion in global grosses for the studio since 1996.

The confirmation of “MI5” would be another boost for Imax stock, which hit another 52-week high Monday with shares at $33.61, and has risen 15 percent in the past two weeks.