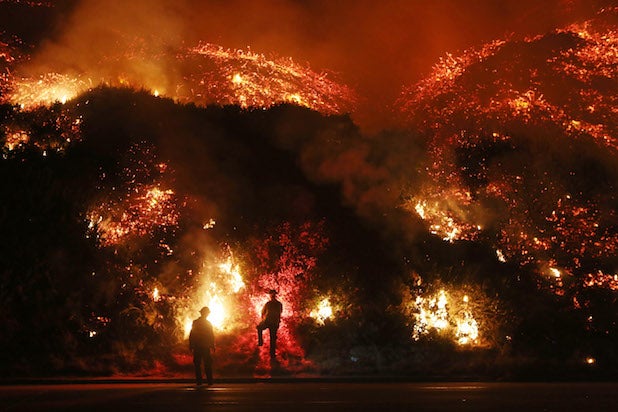 VENTURA, CA - DECEMBER 07: Firefighters monitor a section of the Thomas Fire along the 101 freeway on December 7, 2017 north of Ventura, California. The firefighters occasionally used a flare device to burn-off brush close to the roadside. Strong Santa Ana winds are rapidly pushing multiple wildfires across the region, expanding across tens of thousands of acres and destroying hundreds of homes and structures. (Photo by Mario Tama/Getty Images)

As firefighters work to contain blazes that threatened Los Angeles commuter byways, the Getty Museum and Bel Air, we in Hollywood now have something else to do but reel at terrifying photographs: help those affected.

The Entertainment Industry Foundation has set up the SOCAL Fire Relief Fund to provide members of the industry and the public with a simple way to help our tireless firefighters and those displaced.

Donations to the fund will go to three main beneficiaries: the Los Angeles Fire Department Foundation, providing costly hydration backpacks for firemen and night vision goggles for helicopter pilots fighting the fires; L.A. Kitchen, providing food for first responders and people in shelters who have been affected by the fires; and the Humane Society of Ventura County, providing assistance for over 300 animals displaced as a result of the fires.

Also Read: How They Saved Ojai: A Letter From a Town to Its Firefighters

“The whole entertainment community has watched in absolute awe as these brave men and women rush into harm’s way to protect the rest of us,” said Sherry Lansing, former Board Chair of the EIF. “[We] wanted to provide our industry with a quick, simple way to support them, so we set up the SOCAL Fire Relief Fund to do that.”

More than six wildfires have affected various local regions since last week and a half, forcing over a hundred thousand to evacuate and destroying more than 1000 structures. The combined fires have destroyed more than two hundred and fifty thousand acres. Although more than 9,000 firefighters are working to contain the fires, thousands of residents are still threatened.

“EIF’s mission is to harness our industry’s collective resources to help others, and the firefighters — who have done so much to help all of us in Southern California — deserve our support. We’re reaching out to businesses and individuals across entertainment, media and sports, encouraging them to donate to this fund,” said EIF Chairman Chris Silbermann.

Here’s a way you can help now:

Text donations:
Text GIVE to the number 50555 to give $25
When prompted, reply to complete your one-time $25 donation. Charges will appear on your wireless bill, or be deducted from your prepaid balance. All purchases must be authorized by account holder. Must be 18 years of age or have parental permission to participate. Message and Data Rates May Apply.