The supply of Apple’s "magical iPad," which arrives this weekend, is expected to be tight for those who didn’t pre-order.

The new iPads will be available at 9 a.m. Saturday at all Apple stores and Best Buy locations offering devoted "store-within-a-store" Apple Shops — about 675 of the latter’s 1,000-plus U.S. locations. 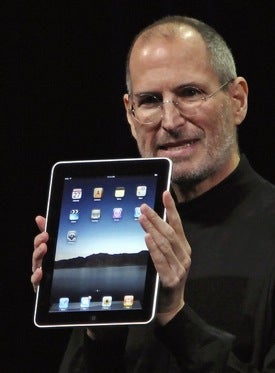 Increasing the squeeze: Each Best Buy location initially will receive only five units of each iPad model — it comes in 16GB, 32GB and 64GB versions — for a total of 15 iPads per store. Of those, according to a Best Buy memo obtained by the Unofficial Apple Weblog, four (presumably one of each plus one more) are to be held back as in-store demonstration models.

Apple said the iPad also will be available through select Apple authorized resellers and campus bookstores.

Only the basic Wi-Fi versions will be available, probably until late April when Wi-Fi+3G models are expected to start shipping. New online orders, even for the Wi-Fi-enabled version, will not begin shipping until April 12, pushed back from the original April 3 date.

Apple’s iPad Camera Connection Kit, a pair of adapters that allow users to transfer digital photos directly to the iPad via USB or SD card, is listed as shipping in late April. It was initially announced in late January as part of the iPad launch, but it was not available for pre-order in March.

Other iPad accessories have a variety of shipping dates: The standard dock and VGA adapter should be available with the iPad on Saturday, but the iPad case is listed as shipping in mid-April, and the keyboard dock in late April. The power adapter, which would be a backup to the one that ships with the iPad, isn’t shipping until May.

Another reason for not ordering online: Apple retail stores will offer a free Personal Setup service "to every customer who buys an iPad at the store," Apple says. Buyers will get help "setting up their email, loading their favorite apps from the App Store, and more. Also beginning Saturday morning, all U.S. Apple retail stores will host special iPad workshops to help customers learn more about this magical new product.”

Apple.com on Monday launched a series of guided tours of various features on the iPad, such as Safari, mail, photos, videos, YouTube, iTunes and iBooks.

The iBooks app for iPad — including Apple’s iBookstore — will be available as a free download from the App Store in the U.S. on Saturday, Apple said.

MacRumors.com also reported that an iTunes 9.1 update will arrive at about the same time as the iPad. According to its source, MacRumors said, the current Audiobooks entry in the iTunes Source list will be replaced with a broader Books section. That revamped section reportedly will display all book content compatible with a given device.

Analysts are having trouble reaching a consensus on projected iPad sales.

Morgan Stanley’s Katy Huberty said in a report that Apple’s manufacturing partners expect to ship 2.5 million iPads in April and May, and 8 million to 10 million in this calendar year. Her previous estimates had put those numbers at 750,000 and 5 million-plus, respectively.

However, Piper Jaffray & Co. analyst Gene Munster is predicting much lower sales, pointing up the difficulty of pinpointing the level of interest in the new gadget. He’s estimating 200,000 units sold in the first weekend and 2.8 million by the end of the year.

For those who do manage to get an iPad this weekend, there will be no shortage of apps. Mashable.com reported the Twitepad app for Twitter is expected to be available at launch. The bigger screen of an iPad will make Twitter easier to use, opening the way for more apps for the social networking service. (Watch a demo video here.)

Apple started accepting iPad apps from outside developers about two weeks before the iPad release date.