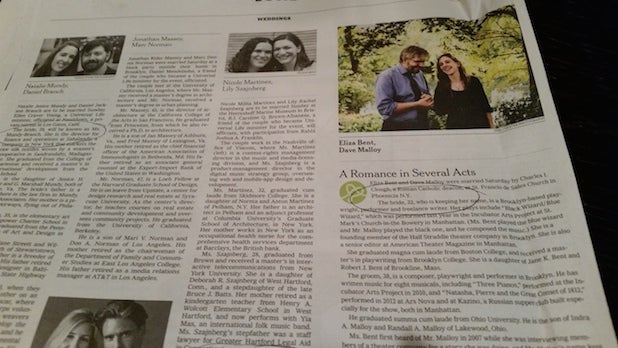 It was a lazy weekend, so I was reading the New York Times Vows section in more detail than usual.

“Tracy Weiler and Kev Davenport were married Saturday at Wahill farm in Batesville, Indiana” went a feature with a cute photo of the couple in a Jeep. “The Rev. David A. Johnson, a minister of the United Church of Christ, officiated at a ceremony led by Ryan Lympus, a friend of the couple.”

Huh? I thought. That’s a weird thing to note.

Then I turned the page and read the next feature. Same deal in the second paragraph: “The bride, 32, who is keeping her name….”

There’s lots of interesting things about “Ms. Northup.” She’s the CEO of the Center for Reproductive Rights. She’s got a B.A. from Brown and a law degree from Columbia. At 55, she’s lived more than a little.

But the Times wants everyone to take note: She is KEEPING HER NAME. (Duh. Would you change your name at 55? Also: she’s divorced, so why not point out that she didn’t change her name the first time either? And wait, she’s marrying an African-American man who is two years her junior: isn’t that worthy of note?)

For a paper that heartily patted itself on the back for starting to announce same-sex marriages some time ago, this editorial tic seems like a throwback that might be quaint if it didn’t sound so sexist.

Why this random piece of information? Why not: “The bride has lost 50 pounds in the last year in anticipation of her big day”?

Or: “The groom was arrested for driving while intoxicated but has cleared his record.”

Or: “The bride’s family paid for the reception, the groom’s family will cover the bar.”

The Times makes no mention of the cases when the bride does change her name. Male gay couples get no name-change mention, and for the one lesbian couple getting married this weekend, the new combined name was the last paragraph of the item. (Makes sense: their friends might want to know how to find them.)

It is no longer rare at all for women to keep their names. A recent survey found that 35 percent of women getting married in their 20s and 30s are keeping their names, and since nearly half of the announcements in “Vows” this weekend told us this fact, I’m going to guess that it’s a lot higher for readers of the Times.

This from Salon earlier this summer:

“The reason for the name change refusal is likely tied to the fact that, over the last 50 years, the age at the time of the first marriage has increased drastically. Today, the average woman is 27 years old when she first gets married. In 1990, she was 23. In 1960, the average bride was only 20 years old.

“The results of this should be unsurprising: Many women already have careers by the time they marry. They have college degrees or law partnerships and published work. It’s time-consuming and difficult for a woman to change all of the documents affiliated with such things and convince people from networks past and present to start calling her something else.”

Earth to New York Times: the 1950s called they want their 24-hour girdle back.