Maybe Nikki’s off her game because she’s on vacation. But I wish for her sake she’d stop embarrassing herself by tsk-tsking others without having the facts to back it up.

Today she decided that TheWrap’s exclusive story in May that Relativity was eyeing a plan to take over MGM — which she couldn’t match, and therefore ignored — was wrong.

She decided that all the buying up of debt wasn’t being done by Relativity at all, and had nothing to do with any plot to take over MGM. She knew at the time, she says, that our reporting was “bulls—.”

“It’s clear Elliot Capital had no strategic interest in MGM and was simply buying the debt to hopefully sell it later at a higher price,” she wrote today. And furthermore, “this transaction had nothing to do with Relativity.”

Really? Nothing at all?

Even Relativity did not deny the story at the time.

But we’ll go you one better. Here’s the proposal to do exactly what our story said at the time: buy up undervalued debt securities from MGM’s investors and force the company into bankruptcy. It was a super-secret plan, called "Project Smith." (Very Matrix): 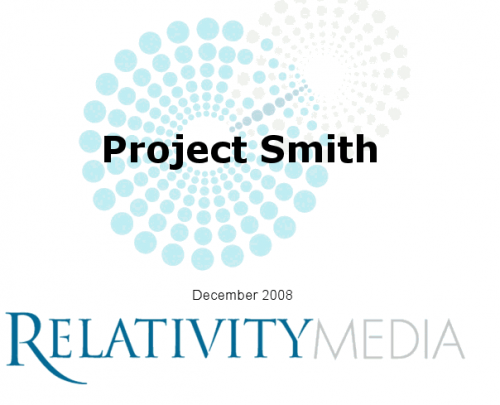 Smith refers to the unnamed company being targetted for takeover. The said company happens to have made such movies as "The Pink Panther," "The Thomas Crown Affair" and the James Bond franchise: The final slide in today’s presentation is the takeover plan itself, which confirms exactly what we reported in two separate stories, here and here.

It actually says that the plan is to force MGM into bankruptcy, through the buying up of debt securities, to the tune of $1.2 billion. Check, check and check. Thank you. 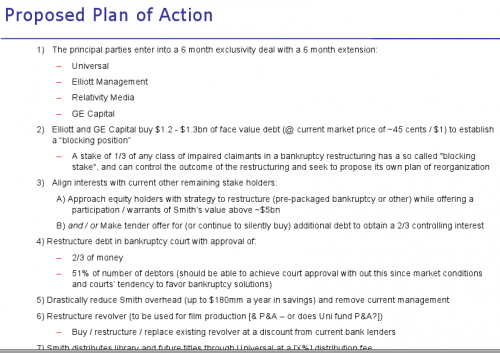 Unfortunately for Harry Sloan and company, the plan was to "remove current management."

I’m told that the attention drawn by our story published in May caused the price of debt securities to rise, and thus made the calculations in the Relativity proposal untenable. But it was a plan that was well underway.

I’m sure Nikki will apologize for her error, and correct her post.

But I’m not holding my breath