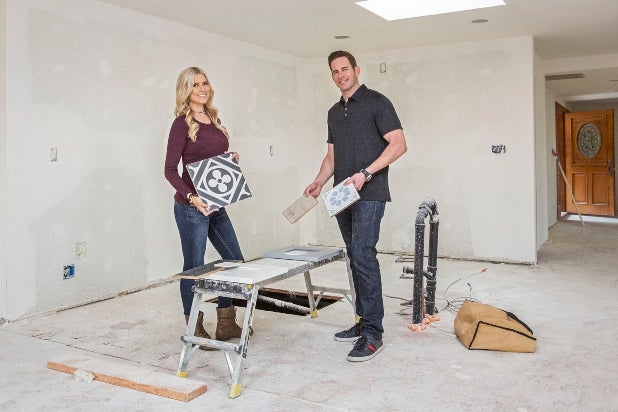 HGTV has renewed “Flip or Flop” with Christina Anstead and Tarek El Moussa for another season.

The series follows the former married couple, now divorced business partners, as they flip houses for profit in Southern California. The current season will air its finale Thursday night. This new season will be their second as divorcees.

In the new season, according to HGTV, “cameras will continue to follow the formerly married real estate and house-flipping experts as they navigate both the expected and surprising challenges of co-parenting and running a successful business. And, even more dilapidated houses will be transformed into beautifully renovated homes that can be flipped for a good return on investment.”

“Christina and Tarek’s relatable, personal journey attracts millions of viewers who now have a true emotional stake in their story and want to see more,” said Jane Latman, president of HGTV. “Their story is real, compelling and filled with the hallmarks of HGTV hits– family and unforgettable personalities with home-related expertise who are passionate about the work that turns houses into homes.”

Anstead and El Moussa both have their own separate HGTV shows airing in 2020 as well. Season 2 of “Christina on the Coast” premieres Thursday, Jan. 2, at 9 p.m. ET/PT and features Christina’s life with her new husband, Ant Anstead. El Moussa’s new series “Flipping 101 w/ Tarek El Moussa,” will premiere in early 2020, and follow him he mentors real estate novices.

The season finale of “Flip or Flop” airs Thursday at 9 ET/PT on HGTV.

And who could forget Alexei and his Slurpee from “Stranger Things?”

As 2019 comes to a close, let us harken back and remember some of the greatest gifts we've been given this year: memes. There was Alexei and his beloved Slurpee from Season 3 of "Stranger Things" (may he rest in peace), the "When the 'Succession' Theme Song Hits" meme of Kermit the Frog dancing, Marie Kondo instructing us to trash absolutely anything that "doesn't spark joy" and so many more. Let's take a pause to remember the TV memes that got us through the year 2019.