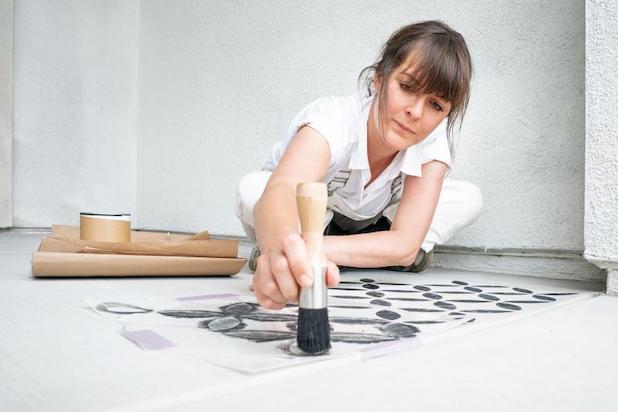 Leanne Ford, like a normal person, loves using the color white generously when designing her spaces. My wife does not, which means I lose the argument in front of the swatch-wall every time.

With the “Rock the Block” star on the phone ahead of her big series premiere, I asked the designer of “Restored by the Fords” — her other HGTV series — to explain to me how to properly explain to my wife why white rules.

“I just really believe in white paint. I think it is the blank canvas, and what it does is it allows everything else in the room to shine and be important,” Ford said. “It’s really fail-proof. It always looks good, it always looks current, and it always looks timeless. There’s no white space through time that you think, ‘That looks dated.'”

Also Read: HGTV Pulls 'What You Get for Your Money' Promo That Jokes Narrator Is 'Classier' Than Late 'House Hunters' Host (Exclusive)

“I think there are people who are looking for kind of a long-lasting decision, and also get, maybe, nervous to make decisions,” she continued. “But look, white paint — it’s a cheat sheet. Just do it, you know?”

HGTV viewers will see plenty of white in Ford’s first “Rock the Block” renovation, when she creates a stunning master bathroom out of her builder’s grade blank canvas.

On the new series, four HGTV designers each renovate an identical brand-new home in the same subdivision. The houses are actually quite nice — and quite pricey, at $750,000 — to begin with. The competition is to see who can stretch that original list price the most.

On Monday’s debut, Ford and her competition, Mina Starsiak Hawk (“Good Bones”), Jasmine Roth (Hidden Potential) and Alison Victoria (“Windy City Rehab”), are asked to describe their design style. Ford is the only one who can’t. (She goes with “My style is…ma-style.”)

No, no, no Leanne, you’re not getting off that easy. I asked Ford to do better.

Clearly, she doesn’t like to describe it herself, but Ford is OK agreeing with how other people have explained the results. “Easy-minimalism” is one she’s heard and particularly likes.

They’re not all Chip and Joanna, or Tarek and Christina. OK, that last one is a bad example.

“When you hear the last name, everybody assumes [we’re married],” Ford told us. “But when they actually see us interact, they realize we’re certainly related.”

Readers can see Steve and Leanne — and everyone else — interact when “Rock the Block” premieres Monday at 9/8c on HGTV.