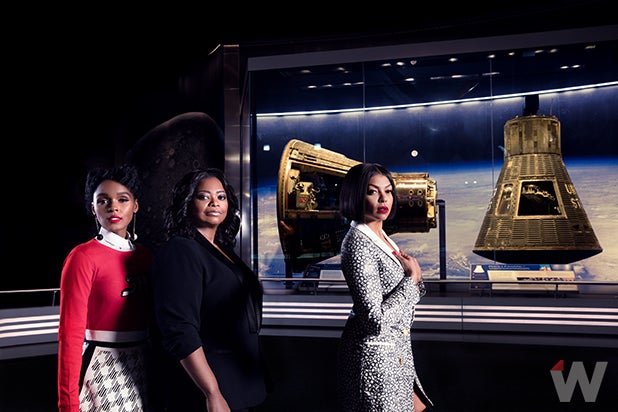 This story on “Hidden Figures” first appeared in the Nominations Preview issue of TheWrap’s Oscar magazine.

Once upon a time, a bunch of African-American women helped John Glenn break through the Earth’s atmosphere and orbit in space.

“Honestly, I thought it was historical fiction,” said Octavia Spencer, who plays one of those women in the film “Hidden Figures.” As she said this, Spencer was sitting in the shadow of the Soyuz spacecraft, built by the Soviets in the 1960s and an essential reason for the race to the moon. A capsule now hangs in the National Air and Space Museum in Washington, D.C., which the cast of the film visited in December ahead of opening weekend.

Spencer plays Dorothy Vaughan, one of the so-called human “computers” employed by NASA to do rapid-fire math to support the effort to launch a manned rocket into space. Her colleagues, equally little-known by history, included Katherine Johnson, a numbers prodigy who helped calculate key trajectories for Glenn’s orbit around the earth in 1961; and Mary Jackson, who became the first African- American female aerospace engineer after joining NASA’s Langley Research Center in Virginia in 1951.

Jackson had to petition a court to be allowed into a segregated school to take the college courses required to work as a NASA engineer, and she did so successfully.

Johnson is played by Taraji P. Henson and Jackson by Janelle Monae, who said that, like Spencer, they were mystified by how little they knew. “I thought the fact that we’d never heard of these women — it had to be fiction,” Spencer continued. “It wasn’t. It was a bittersweet, disheartening moment at first, and then I felt compelled to be part of the story.”

Added Henson, who is most famous for playing the high-pitched character Cookie on the hip-hop TV drama “Empire,” “I had to do it. It felt like it was my duty. I didn’t know these women existed, and I was like, ‘Why are we just learning about this?’ I couldn’t wait to be Katherine Johnson.”

Monae dropped all her other projects to become part of this film once she learned the story was real. “I had a plethora of feelings I went through — one being shock,” she said.

“I had no clue who Mary Jackson was, or Katherine Johnson or Dorothy Vaughan or any of the ‘colored computers’ who worked at NASA during that era. I had no idea who these women were. So I made it a personal responsibility to stop what I was doing and portray Ms. Mary Jackson. I didn’t want any other girl, any other American, to not know about this history.”

Also Read: John Glenn, Astronaut and US Senator, Dies at 95

The intensity of feeling is understandable. In a Hollywood dominated by strong male heroes and a popular culture where African-American women actors too often portray servants or victims damaged by poverty, addiction or crime, “Hidden Figures” is a welcome antidote. All of the actors felt the need to seize the chance to play leading roles with such inspiring personal stories. The fact that it was actual history only made it more vital.

Within NASA, the existence of the African-American “computer” women was not entirely mysterious, but it took a book by Margot Lee Shetterly to break them into wider renown.

“I actually knew of Katherine Johnson two years before I read the book,” said Charlie Bolden, a former Marine and astronaut who now serves as NASA administrator — the agency’s top official. “I gave the commencement at her alma mater, Virginia State, and I kept seeing this name Katherine Johnson and didn’t know who she was.”

After doing additional research, Bolden, who is also African American, concluded, “I was mesmerized by this woman.”

Bolden got to meet Johnson, now age 98, at the White House when President Obama presented her with the Presidential Medal of Freedom in 2015. “That was mind-boggling for me,” he said. “She was this iconic heroine. Had it not been for what she did, I would not even be where I am today.”

Shetterly had become interested in this hidden history as someone who grew up in the NASA community. Her father worked there, and she met these female mathematicians and engineers at company picnics. “She knew they existed,” Spencer said. “There was a picture of a parade for the astronauts and she asked, ‘Who are these women, what do they do?’ It sent her on a mission to find out what their contributions were.”

At the time the women worked at NASA, the late 1950s and early 1960s, the country was in a full-blown Cold War. The U.S. tried to face down Soviet expansion across the globe and suddenly –with the launch of the Sputnik satellite in 1958 — in space, too. The effort to catch up with the U.S.S.R. became a national priority, and as a result the demand for all scientists and mathematicians, including the “human computers” who did the calculations that would soon be the province of mechanical IBM computers, moved into high velocity.

Among those, Johnson stood out. Bill Barry was a NASA consultant on the film who knew her unique abilities at a time when the brightest in the country were focused on inventing math that would allow space travel. “Katherine had a facility with mathematics that boggles the mind,” he said. “It quickly became apparent after she was hired [by the NASA precursor NACA] in 1953 that she had very unusual talents. So when the Space Task Group formed, she was pulled in because they required the very best of the best. And she was a force to be reckoned with.”

Also Read: You Haven't Heard of the Women From 'Hidden Figures,' But You're About To

Indeed, the film depicts the true story of Glenn requesting that Johnson personally verify the math to calculate his orbit before he agreed to take off.

Similarly, Vaughan led the way in figuring out how to program IBM’s new computer — the machine that would replace the women — which led to her becoming an expert in the early computer language Fortran.

But the ironies for women like Johnson, Jackson and Vaughan were extraordinary. A widow before she got remarried to military veteran Jim Johnson (played in the film by Mahershala Ali), Johnson had three children to support. Jim Crow laws were still in effect everywhere – including the segregation that kept Mary Jackson from an engineering degree until she petitioned the court.

These women did not have the right to vote. Or to relieve themselves with dignity. One of the film’s most potent set pieces features Johnson running across Langley’s west campus to the “Colored Women” restroom a half-mile from her office, which in heels often took up to 45 minutes round trip. (In the film, her supervisor, played by Kevin Costner, berates her for her absences, and Henson’s Johnson gives him a powerful tongue-lashing herself.)

While NASA was one of the more progressive places to work and eventually removed that bathroom sign, that history didn’t disappear as quickly as one might think. At the Air and Space Museum, Spencer met Andrea Razzaghi, NASA’s Astrophysics Division deputy director, who recounted, “When I first joined NASA, I started off as a hands-on mechanical engineer, and I was the only woman in a group of 50 engineers. Not joking — the restroom I used said, ‘Woman.’ Singular. I always wondered if that was a mistake somebody made.

“Being a woman and on top of that a minority woman [meant] being treated with some skepticism where men were given the benefit of the doubt,” said Razzaghi. “I often had to get through that hurdle. I don’t think it was a conscious bias.”

“It never is,” Spencer added wryly.

At a time when women often find it difficult to achieve parity in Hollywood, “Hidden Figures” has a remarkably strong female presence throughout. Shetterly wrote the book because she wanted others to know the story, and indeed, she founded the Human Computer Project, a virtual museum that tells the stories of the female mathematicians of NASA.

Veteran producer Donna Gigliotti found and optioned Shetterly’s book before it was even published. Screenwriter Allison Schroeder grew up near the Kennedy Space Center in Florida, studying high-level math and interning at the agency where her grandmother was a programmer and her grandfather took part in Project Mercury. And craftspersons were led by a female director of photography, Mandy Walker.

The songwriter, performer and music producer Pharrell Williams signed on as producer with his partner Mimi Valdes. Gigliotti called him to join the project when she was only 55 pages into the book. “It’s three African-American female protagonists who were scientists, engineers, mathematicians, technologically advanced,” said Williams. “And because there’s a deficit of that representation, that made it all the more sweet.”

Director Ted Melfi also felt called to the film, like a welcome duty. “Pharrell says the universe brings you exactly what you need to be doing,” he said. “It touched me so deeply, it came to me. I don’t know why. It opened my eyes to the unconscious bias of everyday life. This movie has changed my life forever.”

The awards season exposes a number of buried stories from the annals of America’s tortured past, including the slave rebellion of Nat Turner in “The Birth of a Nation” and the injustice of interracial marriage laws depicted in “Loving.” But “Hidden Figures” stands out for being so recent but also for being an unapologetically inspirational tale of women who did not seek the spotlight, content to be given the opportunity to contribute to a greater cause — space exploration.

It’s those kind of people that the film offers up for the pleasure of well-deserved attention, a story that nourishes while it entertains.

“I hope the solidarity these women had in their very insular communities is something we take from the film,” said Spencer. “What we can do as women if we stand shoulder to shoulder is wonderful and it’s all about empowerment. And for the men out there — we have to stop looking at each other externally and look at what we find internally.”