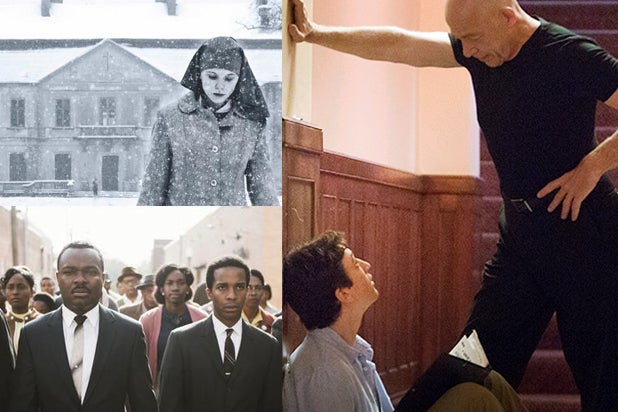 The battle over the hacking and disruption in the release of “The Interview” might have captured all the news over the holiday season. But it’s really other current releases that contain the best historical dramatic events. Although I haven’t seen all the new movies (like “Unbroken”), I can certainly recommend six new movies that contain high drama and intrigue — mostly set during World War II, but also in the Civil Rights era and among the more personal struggles of the workplace and school.

“Diplomacy,” which is set during the last days of Nazi-occupied Paris, involves a last ditch effort by the French to preserve the city’s treasured buildings from Hitler’s mad scheme to bomb them. It’s left in the hands of Swedish diplomat Raoul Nordling to talk Nazi General Dietrich von Choltitz out of leveling the city’s treasures. Their discussion over a tense evening leaves anyone who loves the Parisian landscape sitting on the edge of their seat.

Uniquely shot in black and white, “Ida” is an exquisitely acted story of a young Polish nun, orphaned during World War II, who discovers she is Jewish in the 1960s. She encounters a long-lost relative and life outside the nunnery while discovering her past.

Also Read: ‘Selma’ Review: Martin Luther King Gets His Cinematic Due in a Stirring American Saga

“The Imitation Game” shows how a British team of mathematicians, lead by the brilliant and tormented Alan Turing, attempt to help the Allied cause by breaking the Nazi code and then cope with the moral dilemmas of their discovery.

Set during the 1965 battle for voting rights for African Americans in the South, “Selma” shows Rev. Martin Luther King’s strong leadership in negotiating with President Johnson, confronting the racist Governor Wallace and armed police while unifying a movement to win the basic American right to vote without hindrances.

“Two Days, One Night” presents a French workplace where one of the workers, played poignantly by Marion Cotillard, finds herself in the humiliating position of begging her fellow workers not to take a bonus and allowing her position to stay intact. The solar company, which puts the workers in a no-win situation by pitting them against one another, is the clear villain.

“Whiplash” depicts an abusive jazz teacher, played with finger-snapping precision by J.K. Simmons, who bullies his students into submission, including a talented young drummer, acted by a very determined Miles Teller. An incredible battle of wits in a competition between instructor and protégé, this film’s tension lasts way beyond the length of the movie.