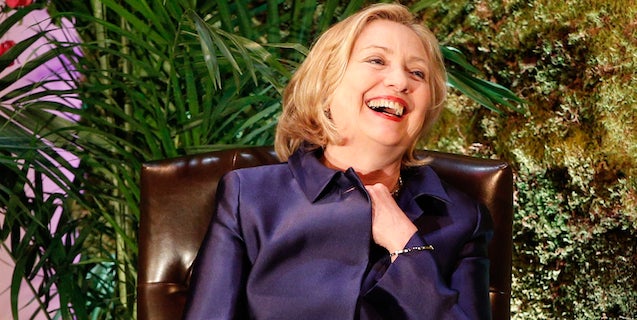 President Bill Clinton has just short of 762,000 Twitter followers, but his wife and Twitter newbie, Hillary Clinton, is already catching up after just 24 hours on the social network.

Since creating her first official Twitter handle on Monday, the former Secretary of State has racked up 390,911 followers and counting. And although she hasn't caught up to Bill just yet, she easily topped the number of followers her husband amassed within the first 24 hours.

According to Twitter data, @HillaryClinton attracted 366,000 followers in 24 hours, while Bill's @PrezBillyJeff only gained 90,000 followers upon going live in April. Even after he switched to a more official handle, @BillClinton, his account only gained another 250,000 followers.

Hillary, who takes pride in being a "pantsuit aficionado" in her short bio, also narrowly beat out the newest leader of the Catholic Church. Pope Francis' @Pontifex attracted around 350,000 followers within a 24-hour period.

So what did the possible 2016 Democratic presidential candidate say in her first 140-character message to her fans? Not much: