Hillary Clinton and Bernie Sanders have barely mentioned each other on the campaign trail. But that all changed as the two squared off for the first time at the CNN debate at the Wynn Hotel and Casino in Las Vegas, Nevada, Tuesday night.

The two headliners dominated the Democratic debate coming out swinging as they shared the stage with a trio of also-rans: former Maryland Governor Martin O’Malley, Former Virginia senator Jim Webb and former Rhode Island governor Lincoln Chafee. Vice President Joe Biden, who is still deciding whether to enter the race, was also invited but opted to sit it out.

It took a good hour to get to the most contentious issue in this year’s presidential race: Clinton’s use of a private email server during her years as secretary of state.

Clinton defended herself by saying the issue was drummed up by Republicans looking to take her down. “Surprise,” Clinton said sarcastically. “I’m still standing.”

But it was Sanders who scored the biggest points when he came to Clinton’s defense.

“Let me say something that may not be great politics. But I think that the secretary is right,” Sanders said to thunderous applause. “And that is that the American public is sick and tired of hearing about your damn emails,” adding, “Enough of the emails!” 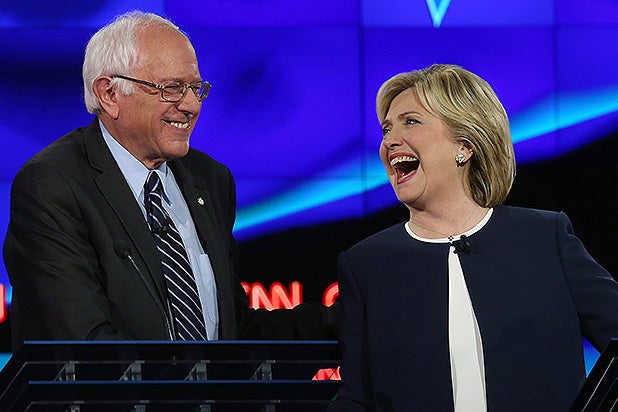 Asked about her shifting positions on various issues, including same-sex marriage and more recently the Pacific Trade Partnership agreement, the Democratic frontrunner strongly denied that she changed her views to match the mood of voters.

“Like most human beings, I do absorb new information, I do look at what’s happening in the world,” Clinton said. Asked specifically on why she changed her mind about the Pacific Rim trade deal she called a “gold standard” while serving as secretary of state, Clinton said it simply did not meet her standards. 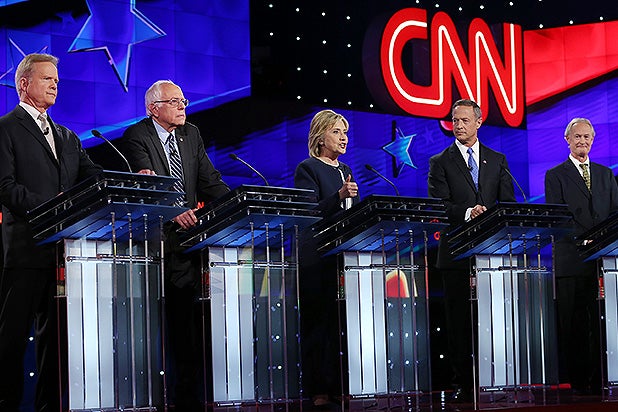 For her part, the former secretary of state attacked Sanders on his votes against major gun control legislation, saying he had not been tough enough on the NRA.

Donald Trump surprisingly didn’t come up all that much. His name was only mentioned in passing as a quip from Clinton during a discussion about whether college tuition should be free for everybody… including the billionaire Manhattan developer’s kids.

While Trump wasn’t present, he made his presence felt by live-blogging the event on Twitter.

“There is not a STAR on stage tonight!,” Trump tweeted at one point during the debate.

CNN may have been right to worry the Democratic debate wouldn’t be as explosive as the first two GOP debates, which drew more than 23 million viewers for CNN and 24 million for Fox News.


15 Most Cringe-Worthy Gaffes From Presidential Debates