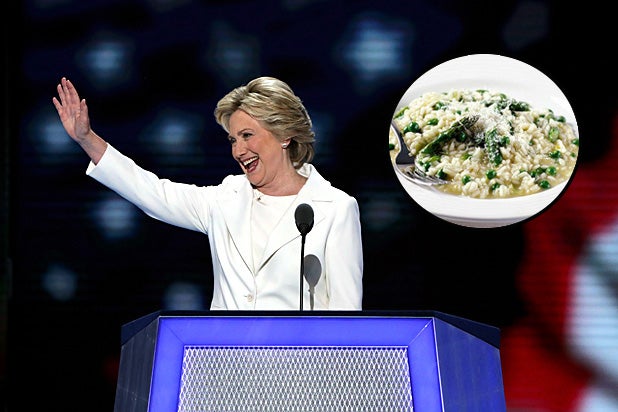 Anyone who ever watched Gordon Ramsay’s “Hell’s Kitchen” knows how hard it is to make a good risotto.

But have no fear, the secret to making the complex dish is here … thanks to the latest batch of Hillary Clinton’s hacked emails.

The trove of personal correspondences made public by Wikileaks has been a hot topic, but some sharp-eyed genius has spotted this email chain between Peter Huffman, a Merrill Lynch financial adviser and former senior official within the Clinton Foundation in Africa, and John Podesta, chairman of Clinton’s 2016 presidential campaign and amateur chef.

The pair had obviously discussed the finicky cooking procedure for risotto before, with Huffman saying that he was doing as he was told but was still confused about whether to add all of the stock at the same time.

“The slower add process and stirring causes the rice to give up its starch which gives the risotto its creamy consistency,” Podesta replied, according to Eater. “You won’t get that if you dump all that liquid at once.”

Podesta is no stranger to the kitchen. In a 2009 interview with Politico, the Washington veteran revealed that he is his family’s chief cook. “I don’t use recipes. I don’t tend to cook like a chemist,” he said.

The Clinton campaign head has no doubt been cooking up a storm in recent months, as the battle for the White House has gotten increasingly stressful.

“Cooking is what I do to relax,” he said. “It’s much easier to see the fruits of your labor. It’s fun.”