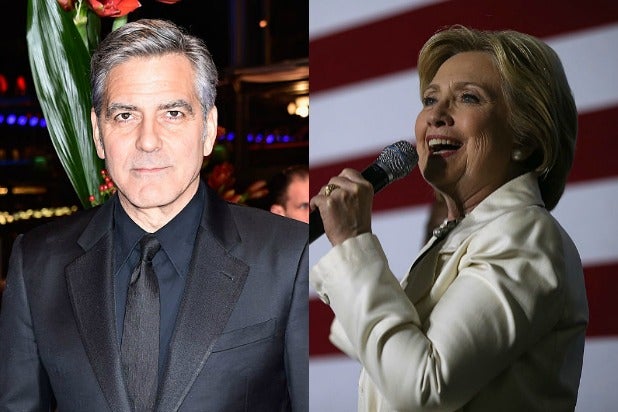 Hillary Clinton held a private two-hour meeting on Saturday with high-powered Hollywood moguls at Jeffrey Katzenberg‘s Beverly Hills home right before her fundraiser at George and Amal Clooney‘s home, a person with knowledge of the meeting told TheWrap.

After the meeting, the group headed over to the Clooneys’ home in Studio City, for the fundraising event of the season.

The gala, which cost as much as $353,400 for couples wanting to sit at the head table with the former Secretary of State and the Clooneys, is expected to bring in millions of dollars for The Hillary Victory Fund, a joint fundraising committee for Hillary for America, the Democratic National Committee and the Democratic committees of 32 states.

A longtime Clinton Hollywood backer who was at the event noted that money raised is not just for her, but for anyone who ends up winning the nomination — including her rival Bernie Sanders — as well as “other Democrats down the ticket” running in November, adding that “Bernie should be jumping up and down instead of complaining about it.”

A source told TheWrap that “HRC floated between two head tables. One hosted by George and Amal [Clooney] and one hosted by Marilyn and Jeffrey [Katzenberg].”

About 150 people attended the event.

The group was greeted by a large number of Bernie Sanders supporters who lined the street leading up to Clinton’s fundraiser, chanting “Feel the Bern.” Demonstrators also showered Clinton’s motorcade with 1,000 $1 bills as she arrived.

Howard Gold, whose family founded the 99 Cent Only Store franchise and who lives next door to the Clooneys, hosted a fundraiser/protest event provocatively dubbed the “99% Party,” with tickets priced at a very Sanders-like $27, according to The Hill.

“We’re not trying to be disruptive or disrespectful,” Gold told The Hill. “We’re just trying to make a statement.”