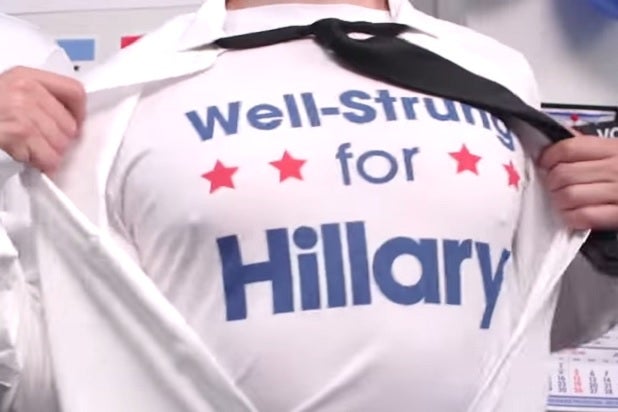 Hillary Clinton has got it going on, according to the band Well-Strung.

The string quartet debuted a new music video this week called “Chelsea’s Mom,” a parody of the hit 2003 Fountain’s of Wayne song “Stacy’s Mom,” and the presidential contender they wrote it for approves.

While the original song concerned a teenage boy who lusted after his girlfriend’s mother, this song sees the four men of the group hoping and praying that Chelsea Clinton’s mom follows in her husband’s footsteps and wins the presidential election in 2016.

Clinton tweeted the video to her followers late Thursday with the hashtag #ChelseasMom2016.

It features lyrics like, “But now she’s much more than the FLOTUS that she used to be/The nation needs a champion and it’s time for Hill-a-ry.”

In the video, the men are working in a Clinton campaign office before taking to the streets carrying an American flag and a Hillary cutout.

Watch the video, and in case you forgot the catchy original, watch Fountains of Wayne’s music video for “Stacy’s Mom.”