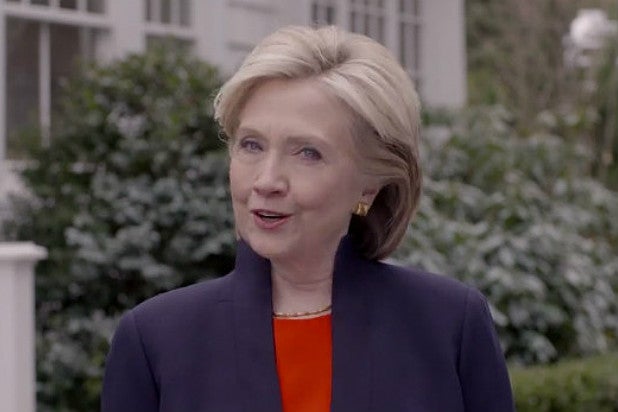 The announcement had been expected at noon ET.  Instead it came several hours late with the Associated Press and the New York Times being tipped off. A short time later, a video titled “Getting Started” was posted on YouTube. “I’m running for president,” Clinton says near the end of the two minute video. She follows the statement with “I’m hitting the road to earn your vote.”

The video features several working-class Americans of different races talking about their lives and goals, in both English and Spanish.

Earlier in the video, a factory worker says “This country was founded on hard work and it really feels good to be a part of that.”

It then shows Clinton shaking hands with a factory worker, and speaking with people in a coffee shop. She looks at the camera and announces, “I’m getting ready to do something too. I’m running for president.” She continues, “Americans have fought their way back from tough economic times. But the deck is still stacked in favor of those at the top. Everyday Americans need a champion and I want to be that champion.”

It ends with Clinton saying: “When families are strong, America is strong. So I’m hitting the road to earn your vote, because it’s your time and I hope you’ll join me on this journey.”

Clinton’s second presidential run will center on reintroducing her to the country and connecting with real people more effectively than she did in 2008, when she unsuccessfully ran for the Democratic Party’s nomination for president.

Previous reports suggest she will take nothing for granted this time around, and will campaign heavily in states she lost in 2008. She also plans to take a page out of President Obama’s playbook and build a grassroots, small-donor network instead of relying too heavily on big donors like she did eight years ago.

Clinton enters the race after two Republicans — Sens. Ted Cruz of Texas and Rand Paul of Kentucky — have already declared.

Watch the video of Clinton announcing her 2016 presidential run.