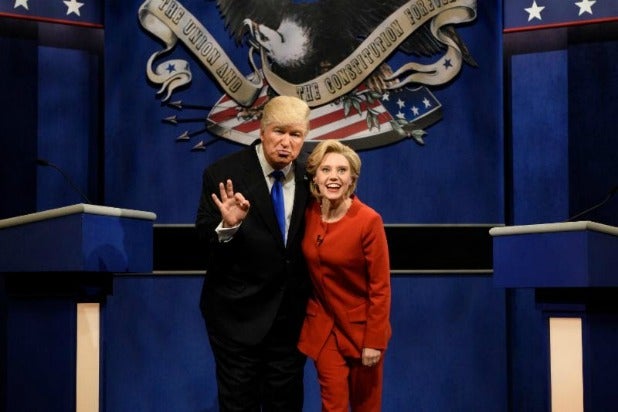 Hillary Clinton had no problem with the jabs during the “Saturday Night Live” take on the debate last week — in fact, she thought it was “perfect.”

“I’ll tell you, when Kate McKinnon came out with the walker, I thought I was going to fall off my chair,” Clinton told Extra! on Wednesday. “She makes me laugh anyway, she is so funny just naturally.”

With Alec Baldwin as Donald Trump and Kate McKinnon as Hillary Clinton on the “SNL” premiere, the faux debate kicked off with Trump declaring that he is “going to be so calm and so presidential that all of you are going to cream your jeans.” McKinnon came out on stage coughing wildly, a gag about her recent bout of pneumonia. Then she rolled forward off the stage, and popped up declaring, “I’m better than ever, let’s do this!”

Clinton also felt that Alec Baldwin‘s Donald Trump impression was great, to the point where she thought the actor must have been “shadowing” her opponent.

“I thought Alec Baldwin was perfect,” she added. “He was amazing. … His look, his scowling, his staring down then muttering his response, he was perfect. I don’t know who is going to show up at my next debate Sunday night!”

Though the “SNL” opener poked decidedly more fun at Trump than it did at Clinton, it certainly didn’t spare her. At one point, McKinnon’s Clinton referred to her “human father” who, she claimed, was totally relatable.

Is Clinton up for another appearance on “SNL”? Well, the democratic presidential candidate has her hands full in the next 35 days, but she said she’s “always up for standing around the bar.”