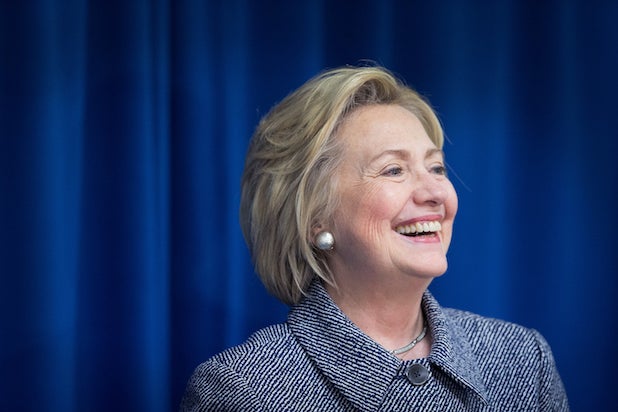 Hillary Clinton is heading back to Los Angeles on Thursday to add more ammo to her war chest.

As TheWrap previously reported, the Democratic presidential frontrunner will headline events in Southern California on Thursday before heading to the Bay Area for some more fundraising.

The former secretary of state will attend a $2,700-per-person luncheon on Thursday in the San Gabriel Valley with Rep. Judy Chu who chairs the Congressional Asian Pacific American Caucus. Tickets for the event are already sold out.

The event will be followed by a “family celebration” reception that same afternoon at the Jim Henson Studios in Los Angeles, where people can take photos with Clinton, followed by a kid’s town hall.

Later in the evening Karen and Russell Goldsmith will host Clinton for an evening reception with special guest Warren Buffett.

On Friday afternoon, Clinton will attend a “Conversation with Hillary” event in San Francisco which will be hosted by Diana Nelson, chair of the Carlson global hospitality and travel company.

On Friday evening Clinton will attend a reception in Palo Alto hosted by venture capitalist Greg Sands and his wife, Sarah.

Tickets to both events will cost the maximum personal donation allowed per election cycle, $2,700.

This will be Clinton’s sixth tour to California since officially launching her second bid for president in April.

In November, Clinton raised $1 million during a star-studded fundraiser hosted by Christina Aguilera and her fiancé, producer Matthew Rutler, at their Beverly Hills home. The event was followed by a “Conservation With Hillary” breakfast at the Brentwood home of actor, director and producer Rob Reiner and his wife Michele.