And, for her next trick… Hillary Clinton will use thousands of handheld placards to perform a complicated card trick that will turn the Democratic Convention into a “unified patriotic picture.”

Almost every seat at the Wells Fargo Center in Philadelphia has a bag taped to it with a colorful card inside. When held together, they will create a picture of something that — Clinton’s team hopes — will look very cool on television.

Though we’re writing this from inside the arena, we don’t know what exactly the picture will be, because we’re obeying the instructions on our card:

THIS IS YOUR CARD TO CREATE A CARD STUNT AT THE END OF TONIGHT’S SESSION. PLEASE DO NOT REMOVE OR OPEN THIS BAG UNTIL INSTRUCTED.

Also Read: Obama: No One's Better Qualified Than Hillary Clinton - Even Me (Video)

An announcement played over the arena speakers said that at the designated time, people in the audience should hold the cards up to their faces and “look through the cutout.” 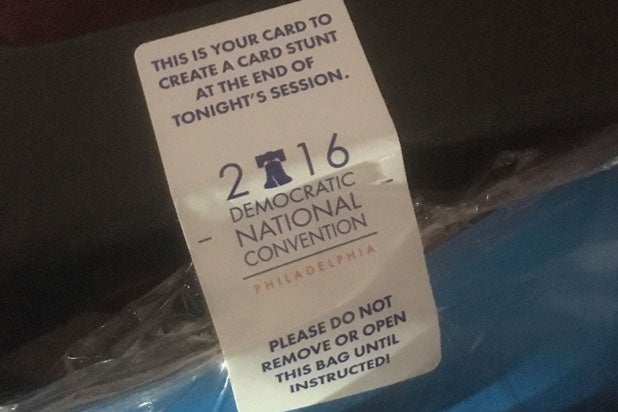 “We promise you will not miss the balloon drop,” the announcer said. Together, the cards will form a patriotic image “throughout the arena,” she explained.

Section leaders will tell the audience when to act.

Sadly, journalistic ethics will probably keep us from accepting a sweet new whip … or even joining in the card trick.