Hillary Clinton is trying to make some lemonade from NBC’s “Commander-in-Chief” lemon of a forum Wednesday night, using Matt Lauer’s universally-panned performance as a moderator to solicit donations.

On Thursday, the Clinton campaign fired off an email calling out the “Today” show host for sitting quietly as Donald Trump claimed, once again, that he’s always opposed the Iraq War, despite evidence to the contrary.

“Not only did the moderator, Matt Lauer, fail to fact-check Trump — he then kept the conversation moving,” the email read. “The worst part is, there’s nothing new about this happening.”

The email went on to say that, “At this point, we should understand that we just can’t sit around and wait for fact checkers in the media to keep Trump honest.”

Clinton’s camp then took a shot at the media for not doing its job.

“We all know that Trump lies a lot. And we all know that many outlets in the press apparently lack the wherewithall to call him out — and help voters understand that what they’re hearing from Trump isn’t normal political talk, but an unprecedented descent into unqualified nonsense from a major-party presidential nominee.”

As TheWrap previously reported, Lauer has been put through the ringer after what many have called a “pathetic” performance at Wednesday night’s event, which apparently got equally bad reviews from NBC execs. CNN reported Thursday that one Peacock brass called Lauer a “disaster.”

Early in his interview with Trump, Lauer failed to challenge Trump when the GOP nominee said he’d opposed the invasion of Iraq as early as 2002, a claim that has been repeatedly debunked. Trump’s backers said Lauer gave Clinton a pass while treating their candidate with disrespect.

“Even if Lauer had been simply listening to [Trump’s] response and had the the memory of an earthworm,” NPR media correspondent David Folkenflik said Thursday, “he would’ve heard Trump say, ‘look, you could go back to an article in 2004 in Esquire where I was against it.’ That would have been a year after the invasion of Iraq.”

Trump cited a 2004 Esquire article in which he questioned the Bush administration’s handling of the war. On Thursday, Esquire appended an editor’s note to the piece noting that the Iraq War began in March 2003, more than a year before the article ran, “thus nullifying Trump’s timeline.”

Richard Grenell, a spokesman for Mitt Romney’s 2012 presidential campaign, also slammed Lauer, tweeting Wednesday: “@MLauer didn’t ask Hillary about her Classified briefings & how it relates to her political commitment to not send troops to a conflict.”

Other media outlets weren’t any kinder. The New York Times declared Thursday, “Matt Lauer Loses the War in a Battle Between the Candidates.” While New York Magazine went with the headline: “Matt Lauer’s Pathetic Interview of Hillary Clinton and Donald Trump Is the Scariest Thing I’ve Seen in This Campaign.” 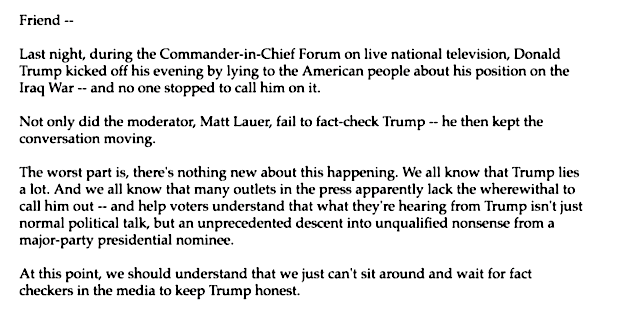