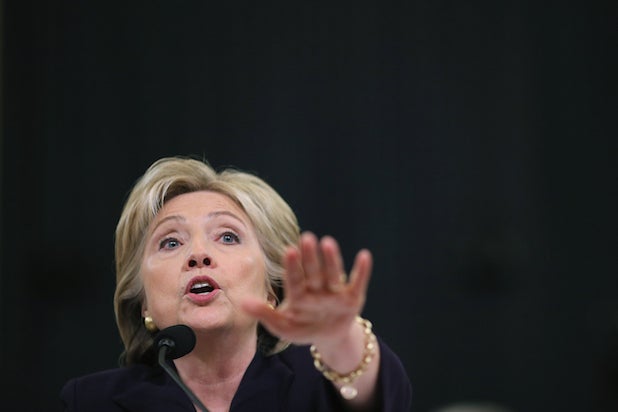 Republicans lawmakers came out swinging Thursday, sharply questioning Hillary Clinton in an effort to show that the former secretary of state failed to protect American diplomats in Benghazi in the months leading up to the 2012 terror attacks that ended in the deaths of four Americans, including U.S. ambassador Christopher Stevens.

For her part, Clinton remained calm, collected and in command, telling the committee she had lost more sleep over the deaths of four Americans in Libya than anyone else on the panel.

Here are the 11 biggest moments from Clinton’s testimony:

1. In what was perhaps one of the most contentious exchanges, a shouting match erupted between Rep. Trey Gowdy, the committee’s chairman, and Rep. Elijah Cummings, the ranking Democrat, as the panel questioned Clinton about why her former adviser, Sidney Blumenthal, seemed to have more access to her than  Stevens.

Gowdy and Cummings shouted and interrupted each other over what information the committee should release as the former secretary of state silently watched from the witness chair.

2. An interesting moment came when Republican Rep. Susan Brooks pulled out two stacks of paper and dramatically plopped them in front of her. The first included 795 Libya-related emails Clinton received between February and December 2011. The second, a pile of 67 emails about Libya she got between January and September 2012.

“I can only conclude by your records that there was a lack of interest in Libya in 2012,” she said.

Clinton said that not all communication happen via email.

3. Gowdy warned there was more about Blumenthal still to discuss, equating the hearing to a boxing match. But he also repeatedly insisted that “this is not a prosecution.”

“If you think you’ve heard about Sidney Blumenthal so far, wait ’til the next round. We’re adjourned,” Gowdy said as the committee broke for lunch.

4. When pressed by Gowdy — in what seemed like an attempted gotcha moment — about critical comments made by Blumenthal about President Obama in one of the emails, Clinton answered, “If you don’t have any friends who privately say unkind things, I congratulate you.”

5. Rep. Peter Roskam stopped his inquiry mid-question as Clinton was handed a note from her team. “I can pause while you’re reading your notes from your staff,” Roskam said, sounding like a high school principal annoyed at one of his students.

Clinton simply answered, “I can do more than one thing at a time, congressman.”

6. There seemed to be clear shift in tone following House majority leader Kevin McCarthy’s slip last month that the committee was instrumental in bringing down Clinton’s poll numbers.

Rep. Adam Smith, a Democrat from Washington, told the panel, “It is a prosecution. It is a partisan exercise. It is not trying to investigate and find out the truth. We have learned nothing substantive, new about what happened in Benghazi.”

7. In one of the more emotional moments during the hearing, Clinton got teary as she described in detail the attacks in Benghazi, particularly as it pertained to Stevens. The ambassador, who was found in a CIA safe room, died later in a Libyan hospital from smoke inhalation.

“We hoped against hope that he had somehow gotten himself out of the compound and that he was somewhere, maybe in the back,” Clinton said as she choked back tears. “We were desperate and we were trying to call anyone we knew in Benghazi and Libya, to get additional help.”

Clinton said Libyan doctors tried desperately to save the ambassador, but to no avail.

8. Perhaps the most contentious moment came when Republican Rep. Jim Jordan of Ohio accused Clinton of misleading the American public about what sparked the attacks, claiming the former secretary of state blamed it on a controversial anti-Muslim video despite knowing that was a lie.

“Where did the false narrative start? It started with you, Madam Secretary,” Jordan said.

Without missing a beat, Clinton shot back, “I wrote a whole chapter about this in my book, ‘Hard Choices,’ I’d be glad to send it to you,” Clinton said. “I think that the insinuations that you are making do a grave disservice.”

The question of whether the video led to the attack prompted Clinton to lose her cool during her 2013 Benghazi testimony, when she responded, “What difference — at this point, what difference does it make?”

9. Republicans tried to demonstrate that Clinton neglected Ambassador Stevens, suggesting she could have done more to prevent the tragedy if he only had more access to the former secretary of state.

“No, he did not, Congressman,” Clinton said calmly. She then explained that ambassadors did not usually ask her where she lived.

10. What viewers at home didn’t get to see was this: What happened each time Clinton returned to the witness chair after each break.

This is what it looks like every time @HillaryClinton sits back down. #marathonhearing pic.twitter.com/uzKmn3EqGi

11. The most bizarre moment probably goes to Rep. Martha Roby, a Republican from Alabama’s 2nd district, who asked Clinton whether she was alone the night the Benghazi attacks happened.