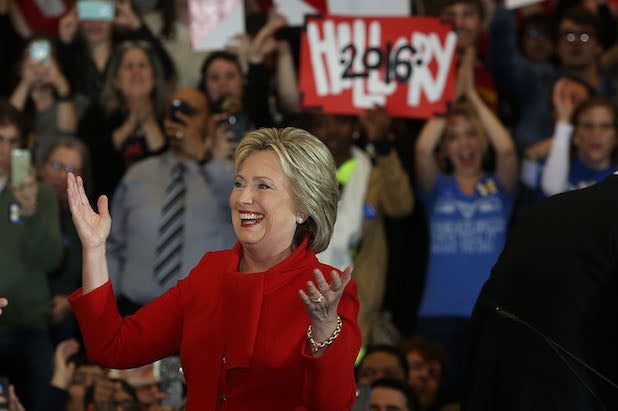 Hillary Clinton’s Hollywood supporters are breathing a sigh of relief on Tuesday, following their candidate’s razor-thin win over Bernie Sanders in Iowa.

“I chewed off every single nail last night,” David Schneiderman, the co-owner and founder of Seismic Productions and a prominent Clinton supporter, told TheWrap. “I was getting up in the middle of the night, checking to see if anything was called.”

Clinton and Sanders were locked in a close race throughout Monday night, with the Democratic caucus results still too close to call as of Tuesday morning. The Associated Press finally declared Clinton the winner at 10:04 a.m. PT.

According to the Iowa Democratic Party’s final results, Clinton bested Sanders by a mere two tenths of a percentage point.

“Once she heads to the South, it will all change,” Schneiderman said. “Bernie is wonderful but people are interested in him because it’s very romantic.”

Dana Perlman, attorney and major Clinton bundler, told TheWrap that he knew it was going to be a tough battle.

“I was in Iowa last week and I knocked on doors and talked to people,” Perlman said. “Iowa is a strong place for Bernie, but it doesn’t represent the rest of the country.”

Pundits have argued that while Sanders managed to prove he is in fact a formidable candidate, the stakes were always higher for him than they were for Clinton in Iowa. While Clinton leads almost everywhere else, Sanders needed to win both Iowa and New Hampshire in order to show that he can be a serious contender.

L.A.-based Democratic political consultant and longtime Clinton supporter Donna Bojarsky told TheWrap, “It only confirms that [Sanders’] support is a only a narrow swath of the ideological spectrum, which is the liberal left. Hillary is poised to reach a broader number of not only Democrats but also Republicans who might not be enamored with the Republican candidate.”

It’s hard to say just how nervous Clinton’s supporters are. Admitting that the race is too close for comfort is never a smart thing, especially while the battle is still going on.

And Andy Spahn, President of Gonring, Spahn & Associates, a public affairs consulting firm based in Los Angeles that also helps raise money for Clinton, told TheWrap in a statement that “Hillary Clinton withstood the challenge of Iowa, showing real grit and a strong ground game. Let’s see what happens when the rest of the country starts to weigh in on Super Tuesday.”

Clinton’s Hollywood posse will be keeping a close eye on New Hampshire next week. The primary election there is expected to be an uphill battle for the former secretary of state. But some say that that might not be a bad thing.

“She’s always been a strong underdog,” Perlman said, adding that a close race is “good for the party.”