Dinesh D’Souza‘s third documentary, “Hillary’s America,” is subtitled “The Secret History of the Democratic Party,” but the movie strains the definitions of both “secret” and “history.” In its first hour, D’Souza lays out a series of past crimes that “Democratic historians” have purportedly tried to cover up, like the Democratic party’s founding by slave-owning president Andrew Jackson — a detail so closely guarded it’s on Jackson’s Wikipedia page.

In its second, having undermined Democrats’ historical claim to the moral high ground, D’Souza attempts to drag Barack Obama and Hillary Clinton into the mud, mostly by associating them with their party’s past. “The Democratic Party,” he says, “is the party of the Trail of Tears, slavery, and opposition to equal rights under the law.” Obama and Clinton are Democrats. Case closed.

For a movie that purports to blow the lid off a massive historical erasure, “Hillary’s America” is almost staggeringly unoriginal: Visit any right-wing website or tune into Fox News for an hour and you’ll hear the same talking points rehearsed ad nauseam. What distinguishes the movie, like 2014’s “America: Imagine the World Without Her,” was co-directed by D’Souza and Bruce Schooley, is its style. D’Souza presents himself as a seeker of truth, a soldier in the war against the dominant left-wing narrative.

There are other subjects in the movie — Vanderbilt professor Carol Swain, National Review columnist Jonah Goldberg, author Peter Schweizer — but most of the time the only voice we hear is D’Souza’s. Although D’Souza appears on screen more frequently than any filmmaker this side of Michael Moore, the camera does not, to put it kindly, love him: For someone so intent on putting himself in front of the lens, he’s uniformly impassive, his sole expression a slightly furrowed brow that conveys everything from curiosity to mild dismay. 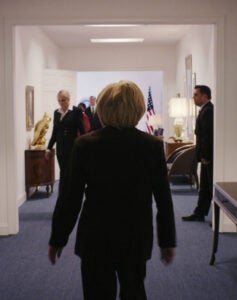 Adding to the unintentional comedy is the thudding literal-mindedness with which D’Souza and Schooley depict the former’s investigations. Digging into the Democratic Party’s dark past involves infiltrating a fictitious museum devoted its history, furtively taking an elevator to the basement, and ignoring the “Keep Out: Authorized Personnel Only” sign at the end of a dimly lit corridor. (Hillary’s email server was more secure.) As he runs down Democrats’ history of supporting slavery, from the Civil War through the end of Jim Crow, we see him pulling a set of manacles from a banker’s box. It looks more like he’s picking through a college theater department’s props collection than digging up dirt on the political past.

Rebutting D’Souza’s individual claims — that Planned Parenthood founder Margaret Sanger viewed abortion primarily as a tool for the extermination of African-American children; that LBJ said his primary goal in pushing civil rights legislation was to “have them n—-s voting Democrat for the next 200 years” — is beyond the scope of a movie review, especially since the movie rarely backs them up with citations or even arguments. Instead, D’Souza and Schooley literally create their own history, using re-enactments to stage their own version.

It’s one thing to do this for the pre-television era, but very different when the film moves into a time when there’s ample footage, if not the kind that makes D’Souza’s point as neatly as he likes. And it’s a third, even less scrupulous thing, for D’Souza to re-enact his own criminal trial and subsequent incarceration for violating campaign finance laws, a sentence he claims was motivated by the success of his anti-Obama documentary. It’s pretty easy to claim judicial bias when you’re directing the actor playing your judge. Worse, these re-enactments aren’t presented as such: D’Souza and Schooley slap fake news-network graphics on top and give it the low-res look of real courtroom footage, which could easily dupe a less skeptical audience.

Then again, “Hillary’s America” isn’t designed to stand up to skepticism. It’s not intended to convince or to provoke thought, but to confirm the biases its intended audience already holds. If you don’t reflexively hiss at the mention of Saul Alinsky, if you blanch at the notion that Hillary Clinton allowed four men to die in Benghazi because “she couldn’t figure out how to make a buck” off saving them, then “Hillary’s America” is not for you.

Most Democrats, like most Republicans, could use a thorough schooling in their party’s history, but D’Souza is only interested in coming to terms with the parts of the past that suit his argument. In his previous movie, where his aim was proving American exceptionalism, D’Souza downplayed the atrocity of slavery; here, when he’s blaming it on the Democrats, he plays it up. He jumps from Woodrow Wilson’s presidency to the New Deal to the Great Society to the present day without a mention of the Republican presidents who came between, except when he asserts that the present-day GOP is “the party of Lincoln and Reagan.”

Considering that her name is in the title, Hillary Clinton comes into “Hillary’s America” fairly late: He might spend less time on her than he does on his time in (fake) jail, where he purportedly confabbed with hardened criminals who taught him the art of the long con. (Guess which party they vote for, according to him.) “Crime,” he says, “is all about stealing,” which is the kind of faux-profound revelation that’s usually preceded by an enormous bong hit.

And Obama and the Clintons are the biggest crooks of all. Where the latter are concerned, D’Souza at least has some evidence to back up his claims of corruption, but he can’t stop there: He goes on to accuse Hillary of abetting Bill’s “sex abuse,” of being not the betrayed, perhaps too-faithful wife but his panderer and his “fixer,” at which point you half-expect the screen to freeze while her forehead sprouts horns.

There are ample moments of unwitting comedy in “Hillary’s America,” like when D’Souza says we know that Bill used the Clinton Foundation to launder graft in the name of charity because “we learned that from the musical ‘Evita.'” But by the time he’s painting Hillary as an inhuman hellbeast with an explicit agenda to take over the country for her own profit, the movie has gone from funny or even anger-inducing to profoundly sad. Only a political culture as divided, as diseased, as ours could support such rhetoric, where the opposition is not merely misguided or wrong but evil incarnate.

In a post-credits scene, D’Souza, who’s teaching a (fake) class of new immigrants about the value of citizenship, asks and answers his own question, as he does so many times throughout “Hillary’s America”: “How will you know when you’ve become an American? When you become a Republican.” In D’Souza’s world, there are good guys and bad, Republican and Democrats, and never the twain shall meet, and whatever history he has to twist or ignore to prove that point is a small price to pay.

“Everyone,” the late Senator Daniel Patrick Moynihan is famous for saying, “is entitled to his own opinion, but not his own facts.” Then again, he was a Democrat.