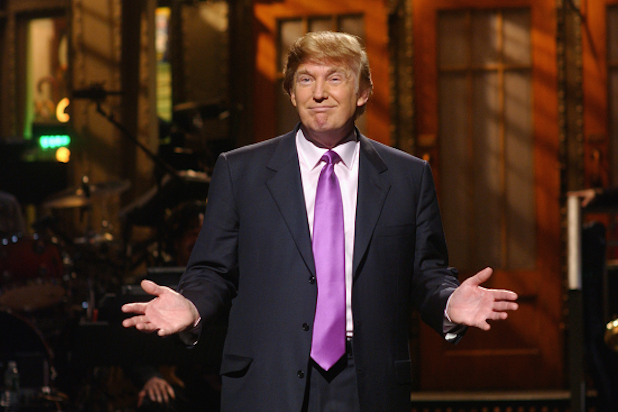 Hispanic advocacy groups are fuming over the fact that NBC ignored their request to dis-invite Donald Trump from hosting “Saturday Night Live” on November 7.

The National Hispanic Leadership Agenda, which includes 40 civil rights and public policy groups, said a letter sent to NBC Universal CEO Stephen Burke and “SNL” executive producer Lorne Michaels on Thursday asking the network to reconsider its decision, has gone unanswered. But they’re not giving up.

“We have a number of options that are on the table,” Felix Sanchez, chairman and co-founder of the National Hispanic Foundation for the Arts told TheWrap. “This is a slap in the face.”

Also Read: Inside Donald Trump's First 'SNL' Host Gig With Show Writer - And What to Expect Next

According to Sanchez, the coalition was hoping the network would at least address their concerns. But now that five days have gone by without so much as a response, it’s looking to step up the pressure on the broadcaster.

The organization is considering holding protests the night of the broadcast, as well as asking sponsors to boycott the show. The group may also reach out to the FCC to get it to enforce its equal time rule, which requires radio and TV stations to provide an equivalent opportunity to any opposing political candidates who request it.

Meanwhile, an online MoveOn.org petition seeking to have Trump yanked from “SNL” is picking up steam with more than 128,000 signatures as of Monday afternoon.

The coalition insists this isn’t the first time it’s been snubbed by the network. The organization says it’s been trying to meet with Peacock execs since 2013 to discuss what it perceives as a lack of Latino representation on the show but has yet to receive a response.

“We were hoping to have at least a conversation,” said Sanchez. “Our opinion is not an isolated opinion.”

Sanchez went on to say that NBC was quick to sever ties with the GOP candidate following his controversial remarks on Mexican immigrants earlier this year but is now helping the GOP candidate “sanitize his comments” by offering him one of the most visible platforms on TV.

“They know they’ll get a ratings bonanza. They have cozied up to him.”

For his part, Trump doesn’t seem overly worried that NBC will dump him.

“If they want to do the show with one-third the ratings, they might do that,” he told Fox News on Thursday. “I don’t see that at all.”

Despite the criticism, media analysts are predicting a super-sized Trump bump in the ratings once The Donald takes stage.