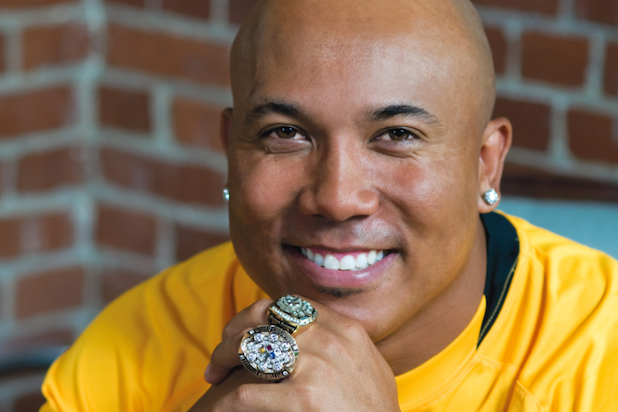 Former Pittsburgh Steelers star Hines Ward is joining the Turner family, as a regular contributor on HLN’s “Morning Express With Robin Meade” and an analyst across all CNN platforms.

“I’m really excited. I feel like I’m going from nationwide to worldwide, and I couldn’t be happier or more grateful for this opportunity,” Ward told TheWrap. “I have a tremendous opportunity with CNN. I’ve always seen myself as more than just a football player. I’ve done so many things in my short life and have a lot to share.”

“In this next phase of my career, I am hoping to share more of myself and my experiences with the viewers, and I can’t think of a better or more prestigious platform to do that with than CNN/HLN and working with Robin Meade. I’m a big fan of Robin and her energy,” the two-time Super Bowl champion said.

CNN Sports Programming SVP Bill Galvin told TheWrap that Ward is the “perfect fit” for the role, even though he was skeptical before meeting the former “Dancing with the Stars” champion.

Galvin had a courtesy meet and great with Ward earlier in the year, initially thinking there was “no way” anything would ever work out. But, much to Galvin’s surprise, the meeting went so well that he arranged Ward to come to the CNN studio in Atlanta, Georgia to meet the “Morning Express” team.

“Talk about instant chemistry, we just put him on the ‘Morning Express’ couch and hit roll on the cameras. They just went and it was such an enjoyable conversation. No script, no prep,” Galvin said. “I started to think that maybe this was meant to be.”

Ward played 14 seasons in the NFL, all with the Steelers. He won the Super Bowl XL MVP award and most recently served as analyst for NBC’s “Football Night in America.” He credits an NFL program that helps players with life after football and his NBC gig for helping his broadcasting career take off.

“About two years before I retired, I started thinking about my post-career life and what’s next. I decided at that time to attend the NFL’s Broadcast Boot Camp to see if I would like the broadcast world. It gave me a great perspective on the media world and football from a much different vantage point,” Ward said. “Then when I actually retired, I was blessed to be able to work with the Mt. Rushmore of broadcasters at NBC in Bob Costas, Cris Collinsworth and the entire crew. I learned a lot from each of them.”

Galvin feels that once Ward got a sense of the team atmosphere at “Morning Express” and within the CNN Sports unit, it was very appealing to the former athlete.

Ward laughed when asked if his time on “Dancing with the Stars” helped him land the gig with HLN, but he admits it didn’t hurt.

“You know what? Because of ‘Dancing with the Stars,’ I think I’m more well known now for dancing than for my 14 years in the league. It’s crazy,” Ward said, before calling “DWTS” one of the best experiences of his life.

“That show gave me the opportunity and motivation to show myself that I could conquer my fears and, of course, gave me confidence knowing that I could do anything I put my mind to,” Ward said. “I think it is a combination of all of my experiences that has given me the confidence to try new things, no matter how difficult they may be.”

Galvin agrees and realized the impact “DWTS” had one Ward’s life when he was recognized during their first meeting — by a woman who didn’t recognize him from football, but from the ABC reality show.

“It was the perfect illustration of the Hines Ward appeal that crosses over any demographic,” Galvin said, before noting that ‘Morning Express’ has a fairly equal split of male and female viewers.

Ward was already based in Atlanta, where “Morning Express” is filmed, so he doesn’t have to relocate. However, he will probably end up doing some traveling at his new gig, as Galvin feels Ward will eventually cover events and things “other than strictly football.”

Ward will contribute to CNN Digital and is expected to contribute to event specials, including events on CNN International. The on-going NFL concussion plague is something that Galvin feels the former wide receiver has a lot to talk about, but the CNN exec isn’t ruling anything out when it comes to potential assignments for his new staffer.

“He’s excited for his voice to be heard across our platforms,” Galvin said, before hinting that Ward could even become a fashion guru for the network. “He is really quite the fashionista. He’s a very well-dressed guy.”

Ward will also continue to host his podcast, “The Hines Ward Show.”