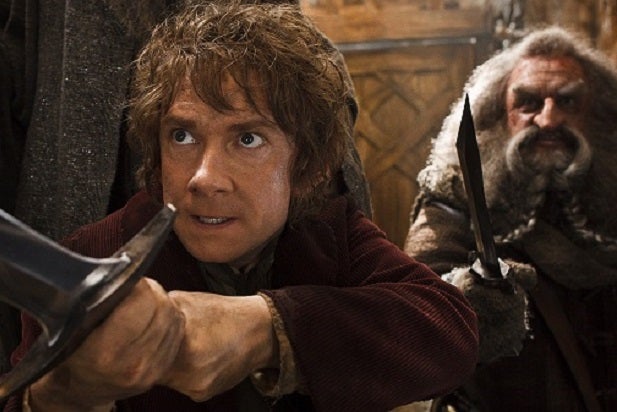 “The Hobbit: The Desolation of Smaug” beat out “Frozen” in a battle as tight as the last lap of a NASCAR race to win its third straight weekend and cap a record year at the 2013 box office.

Peter Jackson’s second movie in his “Hobbit” trilogy, a prequel to the “Lord of the Rings,” will take in $29.8 million over the three days, and has rung up nearly $50 million since Christmas Day. It’s rolled up $190 million domestically and added another $98.3 million from abroad this weekend, to up its worldwide total to $614 million since opening on Dec. 13 for Warner Bros., New Line and MGM.

Disney Animation’s 3D “Frozen” was just behind it with $28.8 million for the three days – an eye-popping 47 percent increase from last weekend – and $44.2 million over the five days. After six weeks, “Frozen” is about to pass $250 million in the U.S. and is bearing down on $500 million worldwide.

Final numbers will come Monday, but with “Anchorman 2: The Legend Continues” at $20.1 million, “American Hustle” at $19.5 million and Martin Scorsese’s “The Wolf of Wall Street” opening to $18.5 million, the jam-packed holiday weekend pushed the overall box office just ahead of last year’s record grosses of $10.83 billion.

“The Hobbit” is on course to match the $1 billion global haul of 2012’s first film, “An Unexpected Journey,” and Warner Bros. has succeeded in making it a holiday habit. Like the first two films, next year’s “There and Back Again” will open in mid-December.

“The finale in a series almost always does the best of a series, so we’re very much looking forward to next year,” the studio’s executive vice-president for distribution Jeff Goldstein told TheWrap. “We’ve still got a long way to go with this one though.”

He noted that while “Smaug” started a little more slowly than the first film, it’s picked up steam over the holidays. That’s particularly true at Imax theaters, which accounted for 17 percent of the grosses – up from 13 percent last weekend — from its market-high 3,928 theaters. The majority of those are 3D which, like the large-format screens, brings a ticket-price upcharge.

“Frozen” is benefiting from tremendous word of mouth, with an 89 percent rating on Rotten Tomatoes and an “A+” Cinemascore. It also got a boost when its only potential competition for families over the holidays, “Walking With Dinosaurs,” tanked last week.

The Will Ferrell comedy “Anchorman 2” was third and has pushed its domestic total to $83.6 million for Paramount.  Unlike the 2004 original film, however, the sequel is scoring overseas and with $25.5 million from abroad, Ron Burgundy and his newsroom buddies have taken in $109 million worldwide in two weeks – easily eclipsing the $85.5 million haul of the first film’s entire run.

The only movie that improved as much as much from last week as “Frozen” was another Disney movie, its Oscar hopeful “Saving Mr. Banks.” The tale behind the making of “Mary Poppins” starring Tom Hanks and Emma Thompson brought in $14.3 million for the three days – a 50 percent jump from last week.

That put it in sixth, ahead of another Christmas Day opener, “The Secret Life of Walter Mitty.” The Fox comedy starring Ben Stiller blew past analysts’ expectations with a three-day total of $13 million and a five-day haul of $25.6 million.

“Our exit polls were very strong, we got a “B+” Cinema Score and we have a PG rating,” said Fox distribution chief Chris Aronson. “That’s going to help us a lot in January, especially if we can get some love at the Golden Globes and Oscar nominations.”

The R-rated “The Wolf of Wall Street,” starring Leonardo DiCaprio in the sex and drugs-fueled saga of the late 1980s stock market boom, brought in $34.5 million over the five days, right in line with expectations for the Red Granite production.

The film’s no-holds-barred portrayals of debauchery clicked with critics, who have it at 76 percent on Rotten Tomatoes, but may have divided moviegoers. Audiences, which were 54 percent male and 90 percent over 25 years of age, gave it just a “C” CinemaScore.

“47 Ronin” wound up with a dismal $9.9 million for the weekend and $20.6 million for the five days since its Christmas opening. That’s lousy, given its $170 million budget, but Universal saw it coming and took steps to mitigate the damage.

“We adjusted film costs in previous quarters and as a result our financial performance will not be negatively impacted this quarter by its theatrical performance,” the studio said in a statement.

“Grudge Match” couldn’t get off the canvas, taking in $7.3 million over the weekend and $13.4 million since opening on Christmas.

The PG-13 pairing of Stallone and De Niro drew older moviegoers – the audience was 68 percent over 25 – and mainly men, just not enough of them. They gave it “B+” CinemaScore, but the comedy directed and produced by Peter Segal is a very long shot to cover its $40 million budget for Warner Bros.

Open Road’s concert documentary “Believe” managed just $2 million for the three days and $4.2 million for the five. To put that in perspective, the young pop star’s “Never Say Never’ opened to $29 million in 2011 and went on to take in $73 million.