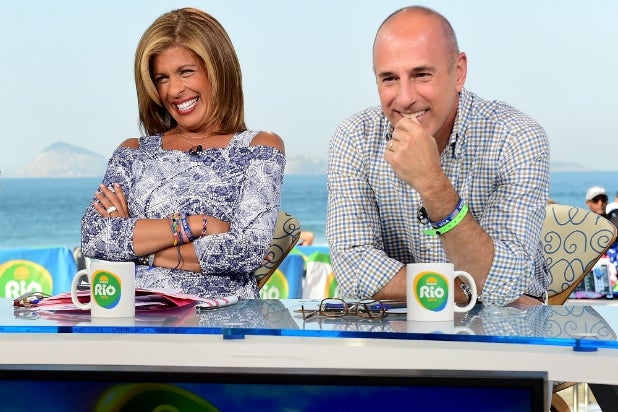 There’s a good reason Hoda Kotb looks so comfortable in Matt Lauer’s former “Today” show chair: she’s a lot better-liked than he was, according to the main metric networks use to gauge the popularity of their stars.

Kotb was named as Lauer’s replacement on Tuesday, just over a month after NBC fired him over sexual misconduct accusations. Everyone seems pretty stoked about the team of Kotb and Savannah Guthrie — and with good reason.

According to the Q Scores Company, Kotb’s most-recent (September 2017) Positive Q Score was a 16, and her Familiarity rating among adults is currently at 30 percent. While those are about average scores for a program host (a 17 and a 35 percent, respectively), they’re better than Savannah Guthrie’s numbers.

Plus, Kotb’s Positive Q Score is a lot higher than Lauer’s 11. No, that’s not the name of a bad Las Vegas casino heist movie remake — it’s his actual lackluster Q Score.

With the anchor spot, Kotb’s popularity levels should grow, Q Scores president Henry Schafer told TheWrap. He also expects her Positive Q Score to climb. Schafer’s company, which is used by the media, entertainment and branding industries to track the popularity and likability of celebrities, is currently putting together its Winter data update. Those figures should be available next month.

Among adult women, Kotb has a 17 Q Score and 33 percent Familiarity rating.

“Another key point is that she is not polarizing as was Matt, even before the latest troubles for him,” Schafer told TheWrap. “I believe the morning shows are ready for two female anchors since women are the primary audience target for that day part.”

Q Scores ratings aside, this decision was really all about TV ratings. Since Lauer’s ouster in late November, “Today” has consistently beaten chief competition “Good Morning America” in total viewers, something the NBC program hasn’t been able to say in a very long time.

With Guthrie and Kotb co-anchoring, “Today” has averaged 4.519 million total viewers per day, with 1.610 million coming out of the key adults 25-54 demo. Compare that with “Good Morning America,” which has received 4.334 million and 1.360 million viewers, respectively, in that same time frame.

No wonder Kotb was the only one ever really considered for the role.

Kotb’s been successfully hosting the 10 a.m. hour alongside Kathie Lee Gifford since 2008, even surviving the recent disadvantage of having Megyn Kelly as a lackluster lead-in.

But Kotb is not entirely new to 7 a.m. — she signed on early for years to pitch in and help Lauer and Guthrie. People tend to think of Kotb as the wine-cork-cracking co-host of the fourth hour, but she’s played key roles in more serious spots — like on the network’s “Dateline,” where she has worked since before the turn of the century.

And if you also need somebody to dance, well, click here. Kotb kinda does it all, and generally with a big, contagious smile on her face.