As candidates position themselves for California’s governor’s race next year, Hollywood money and name support is already up for grabs among a handful of familiar politicians, who know that the entertainment industry will play a key role in determining who survives the primaries.

Each of the leaders has ties to build on:

And though he’s been out of the L.A. mainstream for a while, Attorney General Jerry Brown — who at one point famously dated singer Linda Ronstadt — has “a large cadre of Hollywood folks supporting him,” said Barbara O’Connor, director of the Institute for the Study of Politics and Media at California State University, Sacramento. Brown’s wife, Anne Gust, did not respond with any details. (See accompanying story, "Who’s Behind Who.") 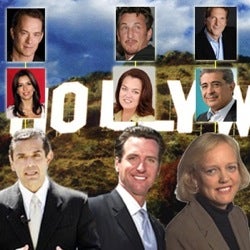 At this early juncture, campaigns are still forming, solicitations are informal and loyalties could change — just as they did early in last year’s presidential primary season, when lots of Hollywood donors hedged bets by supporting both Barack Obama and Hillary Clinton. Reiner, for example, gave money to the Villaraigosa campaign last year.

Then there’s the Feinstein Factor.

As former mayor of San Francisco and senator since 1992, Dianne Feinstein is mulling over the idea of becoming California’s first woman governor. Without her in the mix, Brown led in the most recent statewide Field Poll, released last month, with 26 percent, followed by Villaraigosa at 22 and Newsom at 16. Four other candidates shared 14 percent, with 22 percent undecided.

But toss in Feinstein, and the numbers change dramatically. With Field pollsters including her in the mix, she led the others at 38 percent, with 16 percent each for Villaraigosa and Brown, 10 percent for Newsom, and another 8 percent spread among four other candidates, with 22 percent undecided. It’s widely expected that if she’s in, some of the boys would drop out, and Hollywood support would instantly galvanize behind her. She is expected to announce her decision any time now.

Among Republican voters, the same poll identified Whitman, the former eBay chief executive, as the leading contender, at 21 percent, to 18 for former Congressman Tom Campbell and 7 for state insurance commissioner Steve Poizner, with 54 percent undecided.

Mitch Zak, a spokesman for the campaign, said Whitman has “tremendous connections within the entertainment industry,” including her former service on Disney’s board of directors.

But her avid support for Proposition 8, which banned gay marriage under the state constitution, would appear to make her an unattractive choice for all but the most conservative of Hollywood check writers — assuming they could live with her support of women’s abortion rights and embryonic stem cell research.

The Field Poll did not include Georges Marciano, the founder of Guess jeans, who announced on Monday he was entering the race as an independent.

Without Feinstein in the Democratic primary, the boys will be in a mad scramble for Hollywood checkbooks, and it’s not going to be so easy for Bold Faced Names to decide who gets their money. The three leading Democrats are distinctly left-of-center, which means their priorities might differ more than their policies and approaches to problem solving.

So what’s a celebrity to do?

Stan Brooks, president of Once Upon a Time Films and the chairman of the California Film Commission by dint of his friendship and former working relationship with Governor Arnold Schwarzenegger, says Hollywood voters should consider the candidates’ position on three critical issues that affect the industry: how they would lure back productions that left the state for lower-tax jurisdictions, how they would stop piracy and illegal downloads, and how they would intercede to prevent work stoppages caused by labor disputes between the various unions and major studios.

“There’s a general belief that Sacramento is not paying attention to us,” Brooks said. “People feel like the legislature has a deaf ear to the problems of Hollywood, and it’s pretty profound.’’

He said the effort to reverse the exodus of productions by including a tax credit included in the recent budget compromise package “was remarkable,’’ but only time would tell if it would remain a unique gesture or represent the start of genuine concern for an industry facing multiple challenges.

Or it could be that none of those issues matter so much to Hollywood donors as their own pet issues, like global warming, Darfur, energy independence, foreign wars and health care. Not to mention a sluggish global economy that is reshaping media companies and putting almost 1 out of every 10 Californians out of work.

For that reason, it’s difficult at this early juncture to know whether the ties of the past are ties that bind.

Sean Clegg, a spokesman for Villaraigosa, described the mayor as “Hollywood’s Number One cheerleader” and provided a spreadsheet showing the names of 32 well-known industry figures who supported him last year, the names above among them.

But a Newsom spokesman, Peter Ragone, also made a strong case for Newsom’s appeal to Hollywood donors, basing his support of issues close to them, including gay marriage, universal health care and efforts to fight global warming.

As a result, he said, “the state of play in Hollywood is wide open.”