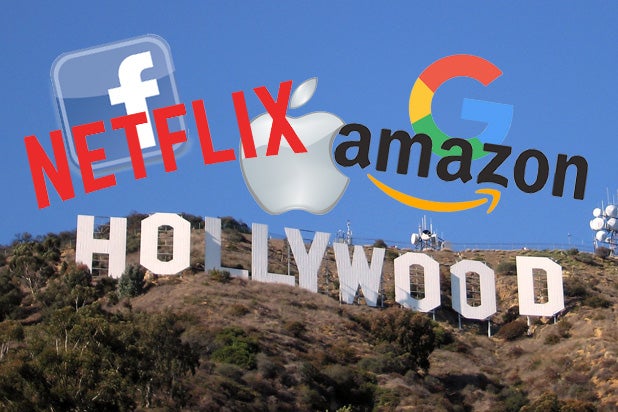 Three months ago, I wrote that the change that has been years in coming to the entertainment industry was upon us.

“The new world has been a long time coming, but it seems to be here,” I wrote at the opening of TheWrap’s annual Grill conference on October 1. “The outlines of the new entertainment ecosystem are becoming clear… The next 12 months will be decisive in defining the contours of what the content industry looks like for decades to come.”

As we face 2018, those changes are about to come barreling through the established order of Hollywood, leaving companies in pieces, shattering long-accepted norms, scattering talented executives to the winds and anointing a new set of power brokers.

Also Read: At TheGrill 2017, A Tipping Point: Tech Platforms Have Arrived on the Shores of Content

It will be a time of disruption and transition, and I am not referring to Harvey Weinstein (more on that later). Here is what looms on the horizon.

1. The End of the Major Studios

Two major mergers are hanging in the balance — the AT&T acquisition of Time-Warner and Disney’s purchase of Fox’s movie and TV assets. Both signal an end to the major studio system that has reigned for more than 50 years, and a new era of consolidation at the topmost levels of entertainment and media.

The significance of Rupert Murdoch’s decision to sell the precious pieces of his carefully built entertainment empire to Disney’s Bob Iger, rather than bequeath them to his sons Lachlan and James, cannot be overstated.

To some observers, this represents a kind of surrender by one of the most combative and ambitious media titans of our time. To others, it reflects a canny assessment of the media landscape and a bold move to cut the losses of a mammoth operation that lacks the technology prowess to compete over the long term with the new power players.

Up for discussion are whether CBS and Viacom will ultimately re-merge and whether Sony will let its own entertainment assets go. As the new order rises, these changes will matter less.

Also Read: Behind the Disney-Fox Merger: 7 Things We Still Need to Know - and 3 We Already Do

We know who the emerging power players are: Facebook, Google, Netflix, Apple, Amazon. For years, Netflix CEO Reed Hastings has led a rising challenge to Time-Warner CEO Jeff Bewkes. Now Bewkes is set to retire as soon as the AT&T deal closes and Hastings just got a $30 million stock grant to keep his growth going.

In the last three months, Netflix has continued to swell in size, with a market cap now at $83 billion, making it bigger than any media company besides Disney, including Time Warner. Just as important, the streaming service has signed deals with some of the most talented showrunners in Hollywood, Shonda Rhimes and Jenji Kohan, women who are on the cutting edge of where pop culture is going. Netflix also signed a deal with Jerry Seinfeld in the past week — and I hear that guy is pretty good.

The other new tech challengers in the entertainment space will have to play catch up to Netflix, but no one doubts that they have almost limitless means to do so. The only question is: How big are their ambitions?

In 2017, Facebook announced plans to invest $1 billion in new entertainment content and has been busy striking deals across town. Apple has done the same with the same initial 10-figure investment, a figure that everyone seems to believe is a drop in the bucket of what they intend to spend on programming in the future.

In my opinion, though, Amazon is the one to watch. Jeff Bezos has utterly cleaned house at his eight-year-old Amazon Studios division, kicking out studio head Roy Price, comedy chief Joe Lewis and head of alternative Conrad Riggs. (Price resigned shortly after a series of sexual harassment accusations surfaced; the other exits appear to be coincidental.)

With the imminent changes at Fox and Warner Bros., Bezos has a rare opportunity to dip into a deep talent pool to restaff and reboot his content operation. Word on the street is that he has been looking to hire top female executive talent. And thanks to the recent corporate upheavals, there may soon be some heavyweights in play, including Fox TV honcho Dana Walden, Warner Bros. marketing/distribution wiz Sue Kroll, Fox film head Stacey Snider and HBO/Annapurna TV veteran Sue Naegle.

So what does the new power landscape of Hollywood look like when all this shakes out? I believe there will be about six major players dominating the space, led by Comcast, AT&T, Netflix and Disney. I’ll leave blank spots for one more technology titan and one wild card because you just never do know.

Another thing: These so-called  “technology” firms need to be recategorized as media and content companies, since they both distribute and/or create the stuff of popular culture. They also need to shoulder the same responsibilities that the old order did — enforcing standards and practices, serving the community and offering accountability to not just shareholders but to consumers.

In the world of independent studios, the business models are scary and the future rocky.

Lionsgate has already merged with Starz after completing an earlier merger with Summit (which gave the company the now-dormant “Hunger Games” franchise). It’s unclear if this new move makes that company big enough to compete.

The Weinstein Company, already financially challenged, is effectively over — the new incarnation will face serious hurdles (Lionsgate is one bidder to buy the outfit, mostly for its library and development slate).

It’s unclear if Fox Searchlight will survive the move to Disney, which already once declared its disinterest in art-house film and is clearly (and correctly) focused on launching its own streaming service to challenge Netflix head-on.

That leaves Focus at NBCUniversal, Sony Pictures Classics and the unknown unknowns around A24.

Also Read: The Weinstein Company on the Block: Bids Due Today

4. Women and the Future

As should be obvious by now, the culture of Hollywood shifted in 2017. The casting couch, the permissive atmosphere on sets, the casual and constant sexual assaults and harassment of the (apparent) past are no longer tolerated as we look to 2018.

Dozens of bad individuals were drummed out of the entertainment and media industry in 2017. (TheWrap’s rogue’s gallery now has a stunning 68 people in it, all men.) The shock waves of the most heinous behavior are still reverberating, spilling over to harm the reputations of icons like Meryl Streep or companies that canceled every Louis CK sketch ever created.

The pendulum is still swinging far to one side, as the latest round of “he tapped my butt/she tapped by butt” nonsense suggests, and eventually it will swing back, hopefully coming to rest somewhere around the midpoint of decency and common sense.

But “the reckoning,” as it is aptly called, has been necessary. Like all revolutions, it has been painful and not always just.

There are calls across the industry for gender parity, not just equity, in the decision-making suites and behind the camera. There are early signs that the savviest of companies — such as United Talent Agency — are adopting these goals or considering doing so. This year’s biggest box office hits — “Beauty and the Beast,” “Star Wars: The Last Jedi” and “Wonder Woman” all had female leads — a positive sign for the future.

Hollywood in 2018 will be about change. Disruption — both on the business side and the cultural side of the entertainment business — will be the guiding theme. Happy New Year.