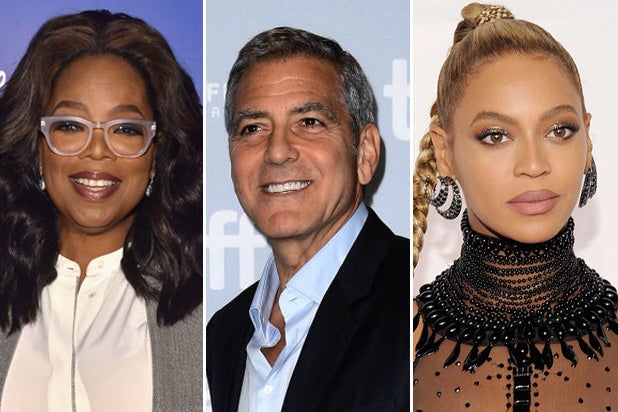 On Tuesday, Hollywood stars George Clooney, Reese Witherspoon, Julia Roberts and Beyoncé will be lending their time and money to a telethon to raise money for the victims of Houston’s Hurricane Harvey. The television networks ABC, CBS, NBC, Fox and CMT have all agreed to air the fundraiser “Hand in Hand: A Benefit for Hurricane Harvey Relief” starting at 8 p.m. ET.

Let’s be charitable and assume the networks want to be part of the solution. But they also clearly see the important role the entertainment industry plays in America and abroad. Needless to say, entertainment journalists and all social media will be covering the telecast, and not merely to report on how much sexier Clooney looks as a graying new dad and how Beyoncé looks post-baby bump.

This comes at the same time that hundreds of celebrities spoke out against President Trump’s plan to rescind Obama-era DACA protections for immigrant “DREAMers.” (Cher even tweeted that “those who can must take a DREAMER in2 their home& protect them!!!I’m ready to do this & others in my BUSINESS do the same!!!”)

It is hardly news that the entertainment community has long used its power and appeal to try to make a difference in the larger society (e.g., entertaining the troops during WWII, protesting against Vietnam, railing against Trump) even if such actions have impacted their box office numbers.

Breitbart News uses its right-wing megaphone to alert its populist audience — also moviegoers — to any celebrity anti-Trump condemnation and in recent coverage even mentioned that Clooney and Damon’s most recent films have been duds, as if to discredit their appeal with the public.

Jane Fonda had a long road back to respectability since her involvement in the anti-Vietnam movement, but switching husbands and then switching from acting to aerobics helped.

Marlon Brando’s slap in the face  to the Motion Picture Academy at the 1973 Oscars, hurt him more than anyone else, but no one could doubt his commitment to the plight of Native Americans.

And the beat goes on. Dave Matthews is spearheading “a concert for Charlottesville” on September 24 to include Justin Timberlake, Ariana Grande, Pharrell Williams and others.

Of course, Harry Belafonte and Sidney Poitier demonstrated for civil rights early and often, risking their lives at times, and certainly their careers as black men who broke the superstar barrier. Paul Newman debated Charlton Heston on network TV about the Nuclear Freeze Initiative then on the ballot in California. Newman probably quietly gave away more money than anyone in the business over the years, including co-founding the Center for Defense Information and virtually saving Nation Magazine.

And it seems a good time to recall the two-time Oscar-winning actor Melvyn Douglas who, with his wife, Helen Gahagan Douglas, were arguably the first political power couple to get out there in front of so many issues: holding countless salons in their Beverly Hills home to organize activities.

Helen, a wealthy former Republican, had been the bigger star when the two met and fell in love on Broadway. When Melvyn received a contract in Hollywood, the two drove across the country and encountered thousands of homeless migrants displaced by the Depression. That became Helen’s first issue, prompting her to give up her career and moved into activism.

Melvyn’s outspokenness on all things New Deal threatened his career: Studio head Louis B. Mayer even took Douglas aside and warned him to stop. When WWII broke out, Melvyn served and while overseas learned that his wife, now a Democrat, had announced she was running for Congress. By the time he returned, she was Rep. Douglas, one of only two women in the U.S. House. The press went crazy trying to create a catfight between Helen and the equally dazzling — if conservative — Rep. Claire Booth Luce, wife of media Time Magazine mogul Henry Luce.

But Helen remained focused on the things that mattered, way ahead of her time: from women’s issues (“Why don’t you report that this year alone, more than 200,000 women will give birth without medical attention?”) to civil rights (she was the first on the Hill to hire a black secretary and desegregated the lunch room) to nuclear disarmament (“If cooperation today becomes contingent upon the atom bomb, why not tomorrow upon some other weapons, say bacteriological warfare?”) to health care (“Eighteen million dollars to crack the atom and not one cent to crack cancer?”).

And then, Helen jumped into the California senate race in 1950, against a Republican named Richard Nixon. Powerful Republicans in Hollywood turned on her, like gossip columnist Hedda Hopper, who waged a war of words against her and her supporters: “She is running for a district filled with communists and Negroes,” Hopper wrote in what was surely a low blow. But Helen, who had never really faced defeat in her life, persevered. Nixon won handily, but Hollywood wasn’t deterred.

The Douglases’ activism was the springboard for future celebrity activists for decades. For Robert Redford, it was a formative lesson: “I always remembered my parents talking about Helen Gahagan Douglas,” the actor said years later. “I think it was my earliest lesson in politics.”

As today’s biggest stars raise funds and consciousness, whether on telethons, late night, Facebook, Instagram or Twitter, they too should recall that the seeds of celebrity activism harken back to this Hollywood couple who put their careers on the line at an equally, if not more, perilous time. The difference today is that the globe’s biggest stars are in it together.

The 25 Highest Paid Stars of 2017, From LeBron James to Beyonce (Photos)

According to a recent list released by Forbes, here are the highest paid celebrities this year.