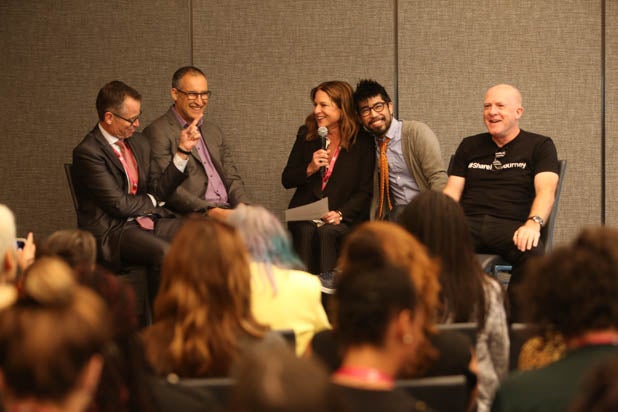 Producers and agents behind the success of films like the Best-Picture winning “Crash,” 2005’s “Thank You For Smoking” and actors like Liam Neeson, Daniel Craig and Emily Blunt came together at the TheWrap’s Power Women Summit to get serious about men joining the fight against misogyny in Hollywood.

“You need new storytellers, you need new energy,” co-head of motion picture literacy at talent agency ICM Partners Harley Copen told the crowd at the “ReFrame: Male Allies Leaning In on Gender Equity” panel on Friday at the Intercontinental hotel in downtown Los Angeles. “We have to start from our perspective as agents as the first line of helping learn how people think about projects. We have to start the change. We have to be the first people.”

Cathy Schulman — “Edge of Seventeen” producer, president of Welle Entertainment and co-founder (along with Keri Putnam, Executive Director, Sundance Institute) of ReFrame — moderated the panel between Copen, agent/producer Kevin Iwashina, agent/producer Cassian Elwes and CAA agent Chris Andrews. While each has had success individually, together they make up part of the 50 studio heads, agency partners, executives and talent who have partnered with Women in Film and the Sundance Institute to join men and women to fight gender disparity in Hollywood. That group calls themselves ReFrame.

For each of the panelists, breaking down the barriers between men and women in Hollywood is a three-step approach. First: challenge the cultural bias. While TV has lead the way to show that women and men are equal, Andrews said, many men behind major films are unconsciously sticking to the status quo.

And that doesn’t have to just mean straight men. Iwashina, who started out his career in the mailroom of UTA and has now worked on films such as the Academy-award nominated “Jiro Dreams of Sushi,”  spoke about his own experience correcting his own bias as an Asian, gay male.

“As a gay male population, I think there is always a very unconscious misogyny. It just exists,” he said. “By supporting women I think i’m a much more well-rounded, well-informed person.”

Also Read: 4 Female Emmy-Nominated Directors on Being Outnumbered by Men 10-to-1: 'What the Hell?' (Video)

The second step is challenging the marketplace perceptions that men consume the most mainstream media. Part of what’s great in the post-#MeToo era, Copen said, is that someone like a Kathryn Bigelow can make action or even sci-fi films for not only men but the women who enjoy the genres as well.

“We don’t need a man making a Mars movie. Not many people have that experience as far as I know,” Copen joked.

Schulman said the third step is challenging the Hollywood pipeline. Schulman asked, “Where are the women? And if they are there why can’t we find them?”

Andrews recalled various times in his career when he heard of a mediocre male director getting another shot to make a film because agents and executives didn’t want to “sway the ship.” Andrews says this mentality only hurts any kind of progress for women in the industry.

To incentivize diversity on film projects ReFrame has begun issuing ReFrame stamps of approval. The stamps, Schulman said, are a mark that tells audiences that the production is gender-balanced.

Just a few days before the U.S. midterm elections, the focus of the panel and the rest of the Power Women Summit is to achieve gender equity in Hollywood, with the theme: The Road to 50/50 By 2020.