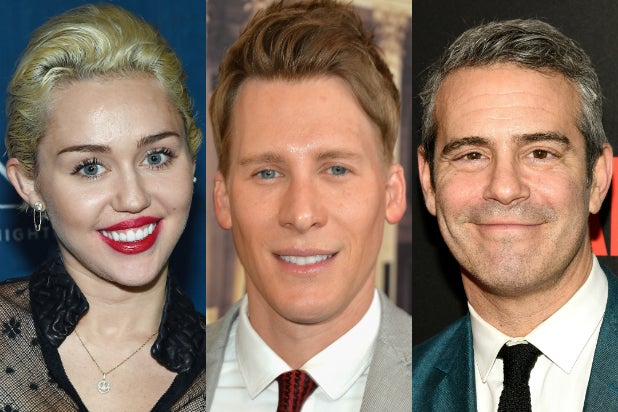 Miley Cyrus, Dustin Lance Black and Andy Cohen join a growing list of Hollywood power players who are condemning an Indiana law that critics say will allow businesses to discriminate against LGBT customers based on religious objections.

“You’re an asshole @govpenceIN,” Cyrus posted on Instagram, along with a photo of Republican Gov. Mike Pence, who signed the controversial bill into law on Thursday.

“A sad day for all in #INDIANA,” “Milk” screenwriter Dustin Lance Black wrote on Twitter. “Gov. Pence, you did not lead today. You were not courageous,” he added.

On its surface, the bill resembles the federal Religious Freedom Restoration Act passed by Congress in 1993, which reinforces protections on religious freedoms for individuals and businesses. But critics believe the law will easily allow businesses to refuse services to LGBT customers based on their religious views — and escape legal repercussions.

A sad day for all in #INDIANA. Gov.Pence, you did not lead today. You were not courageous. You took the path of… http://t.co/meHBLHIf78

The NCAA, which next week will host the men’s basketball Final Four in Indianapolis and has its headquarters in the Indiana city, released a statement expressing concern about the implications of the bill.

“The NCAA national office and our members are deeply committed to providing an inclusive environment for all our events. We are especially concerned about how this legislation could affect our student-athletes and employees. We will work diligently to assure student-athletes competing in, and visitors attending, next week’s Men’s Final Four in Indianapolis are not impacted negatively by this bill. Moving forward, we intend to closely examine the implications of this bill and how it might affect future events as well as our workforce.”

Legendary “Star Trek” actor George Takei had been leading a charge against the bill, calling on fans to ask the governor to veto the measure and promising a boycott if it were signed. DJ Samantha Ronson seemed to be on board, tweeting “Indiana ain’t for me!” late Thursday.

Before the bill became law, Bravo host Andy Cohen tweeted that signing it would make Pence “Jackhole [of the] MONTH.” See some of the social media reactions below.

You’re an asshole @govpenceIN ✌️-1 cc: the only place that has more idiots that Instagram is in politics @braisoncwukong thank you for standing up for what is right! We need more strong heterosexual men fighting for equality in both men and women! Why are the macho afraid to love muchoooo?!? A photo posted by Miley Cyrus (@mileycyrus) on Mar 26, 2015 at 1:06pm PDT