A glut of sagging sequels plagued Hollywood this year, but an even scarier trend has also emerged — an epidemic of threequelitis.

Disappointing threequels have fueled the ongoing chorus of complaints about Hollywood’s lack of original ideas as 2016 played host to a total of nine widely-released series third installments of popular franchises.

Out of them, only two made more money than their direct predecessors: “Captain America: Civil War” and “Purge: Election Year.”

Also Read: Captain America: 'This Is an Embarrassing Night for America'

And Disney-Marvel’s “Civil War” was arguably a not-so-undercover “Avengers” sequel, since it featured every major Avenger, save Thor (Chris Hemsworth) and The Hulk (Mark Ruffalo).

As for Universal-Blumhouse’s third horror installment “The Purge: Election Year,” it delivered a threepeat performance, beating 2015’s “The Purge: Anarchy” by a smaller margin of roughly $8 million, or nearly 10 percent. That’s still pretty great given the year’s dismal box office stats in the category (see chart above).

On the low end was Lionsgate’s “The Divergent Series: Allegiant,” which came in 49 percent lower than the 2015 installment “Insurgent” (which made just over $130 million).

So why is third time not always — or even often — the charm?

“Let’s be honest, going to the well more than once isn’t easy when it comes to blockbuster franchises,” Jeff Bock, senior analyst at Exhibitor Relations, said. “Unfortunately most studios are on cruise control by the time a threequel rolls around. Creatively, most of the series have been worn thin,” he added.

Even worse than “Allegiant” was Sony’s third “Da Vinci Code” movie, “Inferno,” which has amassed little more than $32 million domestically. Compared to 2009’s “Angels & Demons,” which surpassed $133 million, “Inferno” declined steeply by 76 percent. (Of course, the entire series has made the lion’s share of its box office abroad. This time around is no different as the Tom Hanks threequel has grossed nearly $182 million in international territories, representing more than 84 percent of its global take, a percentage split that’s in line with its two predecessors.)

“I think it’s more of a problem of quality,” comScore’s Paul Dergarabedian said of 2016’s disappointing threequels. “I don’t think people really care what numeral is behind the title.” 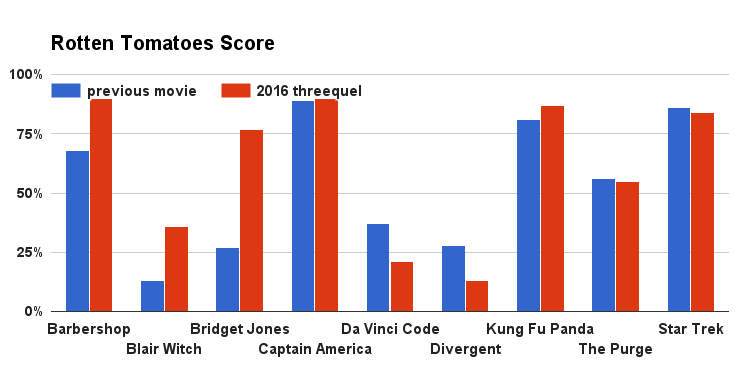 Bock shared a dismal prediction, saying 2017’s threequel track record will be even worse than 2016’s: “The only one that should actually outperform any of the previous installments is ‘Smurfs: The Lost Village’ — mostly because it’s a complete departure from the original franchise, finally delivering a fully animated toon.” Indeed, Sony is billing it as a complete reboot of the series, which has in the past mixed animation with live action.

Bock’s forecast may be a bit too gloomy, however. There are signs of viability for the “Pitch Perfect” threequel as its second installment made a whopping $120 million more than the 2012 original. Of course, that may prove to be a tough act to follow. Also, the second “Thor” movie made $25 million more than the original.

Here’s hoping Hollywood finds a cure to its threequelitis next year.