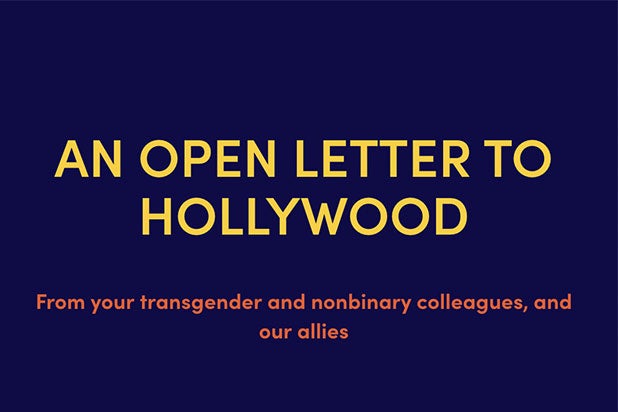 The letter was led by 5050by2020, a strategic initiative within Time’s Up that advocates for the increased inclusion of women, people of color, as well as GLAAD, the world’s largest lesbian, gay, bisexual, transgender, and queer (LGBTQ) media advocacy organization.

Moreover, the letter introduced TRANSform Hollywood, a resource guide that features best practices, in which people can find suggestions on where to find projects created by trans people, or tips on how to make tips on how to make Hollywood work more inclusive. 5050by2020 and GLAAD will next invite studios and networks to sign the letter.

“This historic display of intersectional support for more authentic and inclusive transgender media images sends a loud message of allyship to transgender people,” said GLAAD president and CEO Sarah Kate Ellis. “Hollywood changed the game for gay and lesbian acceptance by telling compelling stories and involving community members in front and behind the camera. At a time when the industry is at a tipping point for empowering diverse voices and audiences are demanding more inclusion, Hollywood needs to prioritize transgender talent and stories.”

“The TRANSform Hollywood resource guide doesn’t just advance our ability to tell authentic transgender stories and to involve transgender and nonbinary talent in the creative process,” said Jill Soloway, Emmy and Golden Globe Award-winning creator of ‘Transparent’ and ‘I Love Dick’, and co-founder of 5050by2020. “It also advances our mission as an industry to create inclusive, fully representative content that enriches our understanding of each other through the empathetic lens of art. We can at once improve the lives of trans people and capture the importance and breadth of our diverse culture.”

The letter was first printed in a Variety special issue of transgender actors including Laverne Cox, Alexandra Billings and Chaz Bono.