After decades of being locked out of Hollywood’s halls of power, women are taking more and more leadership positions at studios, networks, and other major companies in the entertainment industry. But even in c-suites, the specter of impostor syndrome can still appear.

Six Hollywood execs discussed those feelings of self-doubt as well as their push to bring more women into leadership roles at TheWrap’s Power Women Summit at the Fairmont Hotel in Santa Monica. Panel moderator and TheWrap business reporter Raquel Harris cited a KPMG report in which female executives were surveyed and 75% said that they experienced feelings of being incapable for their jobs because of outside pressure despite being more than qualified.

Elizabeth Wright, EVP and CFO of Paramount’s direct to consumer division, said that countering that self-doubt is a daily process, always reminding oneself what they did to get where they are now. 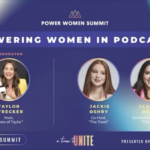 Also Read:
‘Toast’ Co-Hosts Say Your Podcast Doesn’t Need to Be a Stepping Stone – Let it ‘Be Your Somewhere’ (Video)

“A lot of women I know are in roles where they might be one of the only females in the c-suite, and I think that definitely can be intimidating at times,” she said. “And I think it’s a matter of reminding yourself that you wouldn’t have been entrusted into that role if you didn’t put all the work in and improve yourself.”

The group also talked about the importance of networking horizontally and how reaching out to others at the same stage in your career, especially in a non-transactional way, can be key to elevating women into major roles at companies in Hollywood and beyond. Burke and Ghebre-Ab talked about how they first met nearly a decade ago at a brunch created by Burke to help women of color in Hollywood network, and how the relationship that has lasted ever since began with talks that had nothing to do with work. 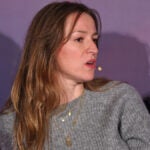 Also Read:
‘The Janes’ Co-Director Describes How the Film ‘Sounds the Alarm’ for Abortion Rights (Video)

“We talked about what people want to do on the weekends, where they’re from, what they want to do outside of this job. And then I think by the end, I think we did [the brunch] for maybe two or three years. There were like 60 women there. And it was so inspiring to see all of these women of color all working in television all across different platforms,” Burke said.

“Continue meeting people and talk about things organically,” Ghebre-Ab added. “Ask about what they are interested in, not just what can you do for me.”

Hayes also said that with the boom in videoconferencing since the pandemic, she’s seen a rise in executives and other professionals networking via short, 15-minute Zoom meetings just to trade ideas about business. She advised the attendees that the best way to make a good impression in the eyes of executives who one day might remember them for a job opening years later is just to show open curiosity about how showbiz works.

“People love to talk about themselves, so if you just sort of admit you’re just interested in learning more about the business, you express curiosity and genuine interest…people are generally very happy to tell you about what they do and share insights,” she said.